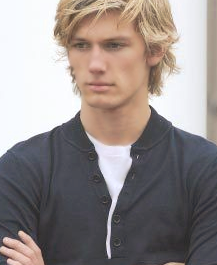 Could Alex Pettyfer be announced as Jace soon?

What a whirlwind of a week it has been for ‘Mortal Instruments’ fans!

After the release of ‘City of Fallen Angels,’ then Lily Collins spoke about her ideal Jace and we even heard from ‘City of Bones’ director Scott Stewart and his vision for the movie and a sneak peek at production on the vampire bikes, comes news that sent TMI faithful into a bit of a frenzy on Twitter last night.

Cassandra Clare was in Los Angeles for a stop on her book tour for ‘City of Fallen Angels’ and met with studio execs from Screen Gems to talk about the progress of the ‘City of Bones’ movie adaptation.

Clare sent her fans into a frenzy in a mere eight words:

That’s right! Clare said she spoke with Alex Pettyfer. About what? Obviously about the role of Jace Wayland (though Cassie’s agent wants you to think they were talking about South Carolina).

Clare later tweeted that “It was nice to talk to Alex. Jace casting not decided but heating up.”

She later divulged more details of how the call came to happen:

“I was in the producer’s office and he got a text from Alex. He texted him back and I said I was in the office. Alex asked if I wanted to talk to him, I said sure, Clint called him, we chatted for about 5 minutes. He was very nice.”

There you have it, TMI folks! We are nearing the official casting of Jace. Then we can move onto the rest of the gang (who’s excited to see who they cast as Magnus? Just saying, I’m pretty stoked).

What do you think? Would you like to see Alex P. cast as our sexy, sarcastic Jace? And just how soon do you see the casting decision coming? Sound off in the comments below!

32 Comments on Cassandra Clare has spoken with Alex Pettyfer