Surely everyone remembers the “City of Fallen Angels” costume contest that took  “The Mortal Instruments” fandom by storm a couple of months ago.

You’ll be surprised to know that it didn’t start off as a costume contest.

The contest idea started as a collaboration between Hiba, of Woven Strands, and Regan, of Thoughts on YA books for the not so Young Adult. 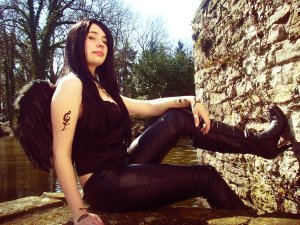 Koneco-chan as Izzy Lightwood. "We have been completely and utterly impressed by your creativity in portraying Isabelle Lightwood. We see her personality in your posture and the gaze in your eyes. What impressed us most is your ability to think out of the box. The angel wings are a smart way of expressing how Isabelle Lightwood is half angel and half human."

Originially they sought out to do an article about the top fashions in “The Mortal Instruments” but then Hiba thought they could take it a step further.

“I wanted to take [Regan’s] “TMI Top Fashions” idea to the next level,” she said. “I suggested –to Regan– turning the Article into a contest and she was all for it.”

“If it weren’t for her the CoFA Costume Contest wouldn’t have happened,” she said.

The contest also wouldn’t have happened had it not been for Hiba’s love for “The Mortal Instruments” series.

“As a person who strives for creativity everyday and loves to think out of the box, I’m not easily impressed,” she said. “I was hungry for a series that would shake me to the core and Cassandra Clare’s Mortal Instruments and Infernal Devices fulfilled that.

“I’m also a sucker for forbidden love. There is something about falling in love with someone you can’t have that intrigues me. Cassandra Clare established this powerful idea successfully in her books when she made us all believe that Jace was Clary’s brother. Only brilliant minds take such a risk, especially in our generation.”

The contest drew over 6,000 hits on Woven Strands and 24 submissions from dedicated “Mortal Instruments” faithful.

But that was the easy part.

“It was very hard choosing a winner,” Hiba said. “All the contestants worked so hard and they were all so creative. Some of them actually made their own costumes or part of their costumes. I mean, if this doesn’t show how truly amazing Cassie’s fans are, I don’t know what does.”

But there had to be a winner.

Hiba and Regan judged the contestants based on the creativity of the costume, the scenery of the photo and the accuracy of both.

The winner was announced as Venessa, also known as Koneco-chan, who posed as Isabelle Lightwood.

“We have been completely and utterly impressed by your creativity in portraying Isabelle Lightwood,” Hiba wrote on Woven Strands. “We see her personality in your posture and the gaze in your eyes.”

So I have to ask. Will there be something similar as “Clockwork Prince”‘s release date creeps closer?

“Everyone that participated in the CoFA Costume Contest has asked me to do this contest again for the upcoming books,” Hiba said. “I think I most likely will. It would be very interesting to see the costumes the fans come up with for the Infernal Devices Series. Especially since the fashion is from a different era (Late 1800’s).”

I speak for everyone when I say, we can’t wait to see what is in store next.