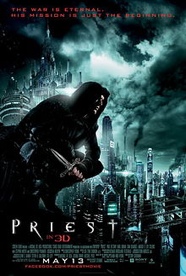 “Priest” tells the story of an exiled Priest (Bettany) who defies orders when his niece (Collins) is kidnapped.

Collins’ performance in “Priest” gave a glimpse of what we might expect of her when she takes on the role of Clary Fray in the “City of Bones” film adaptation.

Bonus features on the Blu-ray and DVD include: commentary with Paul Bettany, Maggie Q, director Scott Stewart, and writer Cory Goodman; deleted and extended Scenes; and the making-of featurettes “The Bloody Frontier: Creating the World of Priest” and “Tools of the Trade: The Weapons and Vehicles of Priest.” Exclusively available on the Blu-ray 3D are Bullets and Crucifixes: Picture-in-Picture Experience and the BD-Live™ enabled movieIQ+sync, which allows viewers to access live trivia information about the movie’s cast, crew, music while watching the movie.

Will you be picking up a copy of “Priest?” Did you see the film in
theaters? What did you think?