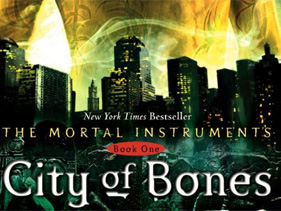 Unless you've been living under a rock in the world of Young Adult fiction--or the entertainment world, really--you know that The Hunger Games premiered on Friday. You best believe that I was one of those people crammed into a movie theater at midnight waiting for the glorious premiere. And I can say that The Hunger Games was one of the most faithful YA book to screen adaptations I have seen. And for good reasons. That got me thinking that Constantin Film and Unique Pictures, the studios producing the film adaptation of The Mortal Instruments: City of Bones, can really learn a lot from Lionsgate in putting the best faithful project out there. Now, it's quite obvious that no adaptation is word for word or remotely close. That's what happens when one has to cram a 300-plus page book into a two to two-and-a-half hour film. Perhaps the most important lesson Constantin can learn from Lionsgate is that the more the author is involved in the process, the better product (and the most faithful) it will be. Suzanne Collins was highly involved in the Hunger Games, from co-writing the script to having creative input. So far Constantin has been very intent on getting Cassandra Clare as involved as possible in the process, much to Clare's surprise. I have always entirely expected to be completely left out of the film-making process," Clare told Hollywood Crush, "so it’s been amazing to be included." Something Lionsgate was intent on right out of the gate was getting the fans involved as much as possible. Whether it was working with fan sites to relay news or contests or catering to the fans' needs throughout the process, Lionsgate recognized that getting the fans involved would promote the film in ways they could not. Lionsgate was able to do with The Hunger Games was adapt the book to film and in turn keeping it as close to the book as possible. Aside from that, they also added elements not present in the book that worked on the big screen. Of course no page to screen adaptation is perfect. There is obviously going to be parts missing that readers will notice, but they are done to speed up the film and meet a respectable time frame.

The Hunger Games was so effective in its on screen portrayal in large part to the wonderful cast.

Jennifer Lawrence was the embodiment of Katniss and carried the film, and her counterpart Josh Hutcherson was able to perfectly channel Peeta. The supporting cast was just as brilliant and brought something special and unique to their roles.

But it wasn’t just the actors in their roles that made the cast so wonderful, it was the chemistry between the actors that shined on screen.

Clare has already raved about the chemistry between Lily Collins (Clary) and Jamie Campbell Bower (Jace), which brought her to tears while watching their screen test.

“I’m watching the audition and I literally started crying because that was my Jace and Clary on the screen,” Clare told Hollywood Crush back in June 2011. “And it’s an incredible feeling to see that even as an audition”

Now Constantin must effectively cast the rest of the characters.

Lionsgate truly succeeded into bringing the world of The Hunger Games to life.

While The Mortal Instruments world is nothing like that of The Hunger Games, the dark feel of after-hours New York City is in itself a character and should be used effectively.