Here are some tidbits from the event via TMI Examiner:

A major character will die in the series. Before you start throwing things, let me first point out a previous QA with Clare. When she was asked if she would be afraid to kill off a main character she answered, “I would not be afraid, I would be sad but sometimes it would be necessary for the story to move on.” So this pending death should not be a surprise toMortal Instruments fans. Clare is going to do what’s best for the series and all of her fans should be happy with this.

As for what’s going to happen in ‘City of Heavenly Fire?’ Clare states, “what the end of ‘City of Lost Souls’ promises.

Someone inquired about any romance between Simon and Jace but Clare explained that Jace was busy having another bromance.

Currently Clare’s favorite book is ‘Clockwork Prince’ since it recently one the Children’s Choice Book Award for Teen Book of the Year. If Clare hadn’t become the amazing author fans adore, she probably would have been a vet or cat lady. Hmmm, this explains the appearances of Church and Chairman Meow in her books!

On writing advice she stresses that it is important to “write everyday. Anything. Just write.”

And to the topic that most fans are most interest in….movie news. Clare says that there is lots of casting for ‘City of Bones’ going on behind the scenes. With filming beginning this August movie news should really start to pick up.

Here are photos via VLC Productions: 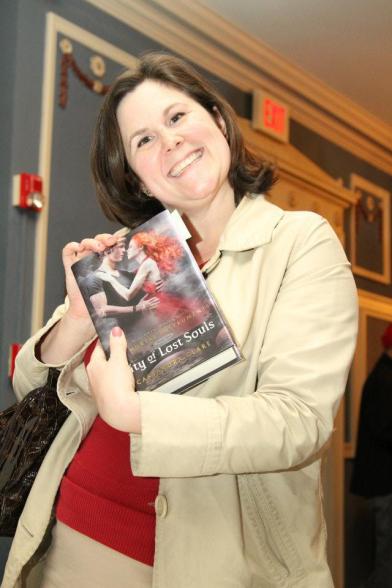