The first round of YA Sisterhood’s 2nd annual YA Crush Tourney beginss today (Friday, July 6) with our Will Herondale, the No. 1 seed, going up against No. 32 seed Vincent from Die For Me.

Time for Shadowhunters, Downworlders and Mundanes to unite and get Will into the Superior Sixteen.

Katie from Mundie Moms and I are co-advocating for Will in the YA Crush Tourney. Here’s what we had to say about our favorite tortured Herondale:

Hello everyone. This is Alyssa from TMI Source and I am beyond honored to be a co-advocate for Will Herondale from Cassandra Clare’s The Infernal Devices, along with Katie from Mundie Moms.

William Herondale. It’s a name that sends fangirls into an uproar. And for good reasons.

“When Will truly wants something,” said Jem, quietly, “when he feels something — he can break your heart.” (ain’t that the truth.)

I could drone on and on about what makes Will the ultimate YA Crush, but it can all be described using five S’s.

SNARK – It’s obvious where Jace got his snark from as Will was perfecting it back in Victorian London. Will has some of the best one-liners and quotes (“Never trust a duck!”) and it’s all a part of his charm. He knows how to get to people while also getting satisfaction out of it. It’s one of Will’s many weapons.

“There was a time I thought I was a ferret,” Will said, “but that turned out to be the opium haze. Did you know it had that effect? Because I didn’t.” –Clockwork Angel

SEXY – Dirty Sexy Balcony Scene, anyone? With that ink black hair, those intense blue eyes and the familiar Shadowhunter runes, it’s no wonder where the Herondale men get their good looks. Of course being a Shadowhunter lends itself to Will’s sexiness.

“He bent to put his cheek against hers. His breath against her ear made her shudder with each deliberately spoken word. “I have wanted to do this,” he said, “every moment of every hour of every day that I have been with you since the day I met you.” –Clockwork Prince

SWEET – While his sweet moments don’t dominate his personality, Will is one of the sweetest guys in YA literature. Whether it’s his incredible devotion to his parabatai Jem or his intense love for Tessa, Will can melt your heart with his sweet words and actions.

Was there ever a more beautiful sound than your name? To speak it aloud makes my heart ring like a bell. Strange to imagine that, isn’t it – a heart ringing – but when you touch me that is what it is like: as if my heart is ringing in my chest and the sound shivers down my veins and splinters my bones with joy.

Why have I written these words in this book? Because of you. You taught me to love this book where I had scorned it. When I read it for the second time, with an open mind and heart, I felt the most complete despair and envy of Sydney Carton. Yes, Sydney, for even if he had no hope that the woman he loved would love him, at least he could tell her of his love. At least he could do something to prove his passion, even if that thing was to die.

I would have chosen death for a chance to tell you the truth, Tessa, if I could have been assured that death would be my own. And that is why I envied Sydney, for he was free.

And now at last I am free, and I can finally tell you, without fear of danger to you, all that I feel in my heart.

You are not the last dream of my soul.

With hope at last,

SELFLESS – It’s what makes Will my favorite character in Cassandra Clare’s Shadowhunter Chronicles. He has sacrificed everything to ensure the well-being of those he loves. Whether it was leaving behind his family at age 12 or giving up the girl he loves (Tessa), Will has endured endless emotional turmoil at his own expense. Even after he learned he wasn’t cursed he still thought of others’ happiness over his own. It’s a quality that defines his character and makes the fangirls swoon.

“Tessa craned her head back to look at Will. “You know that feeling,” she said, “when you are reading a book, and you know that it is going to be a tragedy; you can feel the cold and darkness coming, see the net drawing tight around the characters who live and breathe on the pages. But you are tied to the story as if being dragged behind a carriage and you cannot let go or turn the course aside.” His blue eyes were dark with understanding — of course Will would understand — and she hurried on. “I feel now as if the same is happening, only not to characters on a page but to my own beloved friends and companions. I do not want to sit by while tragedy comes for us. I would turn it aside, only I struggle to discover how that might be done.”

“You fear for Jem,” Will said.

“No,” Will said, hoarsely. “Don’t waste that on me, Tess.” –Clockwork Princess teaser

SHADOWHUNTER: He’s a kick-ass Shadowhunter and will resort to biting vampires if necessary. He can also charm the dickens out of anyone when necessary.

“I shall charm him with such force that when I am done, he will be left lying limply on the ground, trying to remember his own name.” –Clockwork Prince

Vote Team Will Herondale because if you don’t, then the ducks will win! (Never trust a duck!) 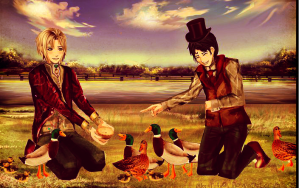 Just how is it acquired?

One must go down to the bad part of town

Until one is very tired.

Demon pox, oh demon pox, I had it all along—

Not the pox, you foolish blocks,

I mean this very song—

For I was right, and you were wrong!”

Visit Mundie Moms and stay tuned to TMI Source for more Team Will in the YA Crush Tourney!

Learn more about the YA Crush Tourney.