We are now entering the second week of filming on THE MORTAL INSTRUMENTS: CITY OF BONES in Toronto. TMI Set Day 6 kicks off in downtown Toronto with the scene that started it all: Pandemonium. Stay tuned for updates as they happen from fans on the scene on the sixth day of filming.

-Jemima West does NOT have Twitter. There is currently a fake (@Jemima_West) posing as her.

-The crew is not allowing photos to be taken. Looks like they're doing all they can to keep this scene a secret.

-The blue-haired demon has been spotted.

-Jonathan Rhys Meyers (Valentine) has been spotted on set.

-Pandemonium sign "in black with orange font" spotted by @JennRichelle.

Follow @MichelleMags, @stolethenight, @_NightAssasin, @haley_davies, @ashley_fodor, @JennRichelle for updates from the set. **We have taken down the photo posted earlier from Pandemonium as it was not approved by director Harald Zwart or the crew**

Hit the jump for more photos from Day 6 of filming at Pandemonium: 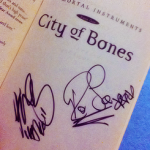 Catch up on SET PHOTOS and SET REPORTS from the first week of filming.