Filming on the highly-anticipated adaptation of THE MORTAL INSTRUMENTS: CITY OF BONES continued on Friday in Hamilton at the Hotel Dumort set. Amelie (@aminie8) was one of the fans who made the trip to the set and she wanted us to share her experience with you. Check out the full report:

My personal journey to The Mortal Instruments set in Toronto had to start from leaving Montreal for me. So I woke up at 5AM on friday in order to catch my 6:45 train. Lovely journey, at 11:30 I was at Union Station, but I still had to leave my luggage at my hostel, so this is just what I did, and returned to Union afterwards in order to catch the 1:30PM bus to Hamilton.  I cut it pretty close, so I had to run in order to catch the bus, and upon entering, the driver told me it was full.  “NO!!” I though, only to hear what came afterwards: “But you can make the drive standing up.” So what the heck, TMI is too important, I decided that hurt knee or not, it was more important to arrive the earliest possible on set, and I entered the bus for the 1 hour drive.  It’s a pretty lucky thing that the GO bus terminal in Hamilton is literally just a 5 minutes walk from where the set was, and I honestly don’t understand why more people from Toronto didn’t make the trip. At 2:30PM when I got there, the place was pretty quiet, with only a few people being there, most from the Hamilton area.

I was told that Jemima, Kevin, Lily and Jamie were already inside, but that it was unsure if Robert was already in or not. Mostly, it was just stunt people (Lily’s was the one we saw the most) running by, NYC cars moving about, extras in vampire outfits, crew with masks, and Husky dogs (!!!).

We saw quite a lot of the main cast going in and out of a van that was actually used as a taxi between the trailers and the hotel, which was every time a bit sad (so far) and exciting (“OMG did you see that?! Are you sure it’s Jamie? Maybe it was his stunt? Oh no, that was him!”)

(So I went and sneaked where the trailers was, but I was too scared to disturb to go too close.)

At some point in the afternoon, we saw someone walked by and waving at the group I was part of.

We replied “Hey!” but by the time we actually realized it was Jemima West in her shadowhunting gear, she was already far.

As the day passed, we saw more and more of the costumes, and the wicked makeup, and the costume freak I am was pretty pleased! You will not be sad guys!

Around 7PM something, there started to be masses of people going out of the hotel building, and we were lucky enough to catch Jemima, Kevin, and Robert WALKING to the trailers.

Kevin was super professional and signed everyone’s book politely while everyone swooned over his eyes etc. But he clearly was in a hurry to go.

Jemima was all lively, and I had the chance to chat just a bit in French with her. “Tu parles français? C’est génial!” “De Montréal? J’adore cette ville!” (“You speak French? Awesome!” “From Montreal? I love that city!”)

Robert was his usual self and was fooling around as usual, calling everyone “baby” and being all “Ah… so you heard about my boobs, right?” He drew funny things with his autograph to almost everyone. I wasn’t granted with one of them, but when he saw that Cassandra Clare had already signed my book he said:
“Is that Cassandra Clare’s autograph? (Yep!) God she signs like a robot!”

I was told afterwards that in between all this autograph frenzy Kevin Durand had walked by. This makes me really sad because, I love this actor and I would have been so excited to get his autograph!!

Most people decided to call it a day at that point, and we pretty much all agreed that it was safe to go and eat something since the cast wouldn’t be coming back too soon. Since the people I was hanging out with had left, I went to eat alone.

When I came there was no one there, and the spot where all the fans used to be was occupied by crew members eating, so I decided to be polite, and I sat a little farther. There wasn’t much going on at that point. It was dark, and policemen were on set, directing traffic away. It was pretty clear they intented to film something outside, what with the humongous light vehicle that was parked in front of the hotel (really impressive, when up, the lights were at least 7 stories high!) 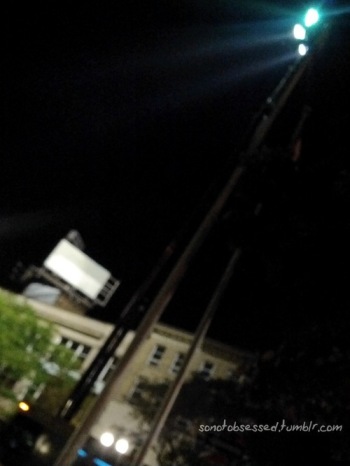 When more of the extras started to get there, I moved back to the previous spot (still the only fan on set) and a police officer came my way.

“Oh no!” I thought. I was convinced they had kicked out all of the fans earlier (which would explain why no one was there when I came back) and I wasn’t noticed earlier because I was alone and not so close to the main entrance.

But no! The officer started to talk to me about random stuff, and what I was doing in Hamilton, etc. He proceeded to tell me all kinds of cool stuff about the hotel the movie was filmed in.

The Royal Connaught Hotel is an historical building and used to be one of the prettiest in the area, but the owners got behind in taxes payment, so they lost it. The new owners didn’t have the money to put it back in order so it has been abandoned for at least 10 years now. He told me that at first, there used to be a lot of humidity in there, and then mould, and then it caught fire at least two times, and is now always used by squatters and the such. He said the stink inside was insane, with all of the mould, and the heat and humidity, and that there was an incredible urine smell inside.

It was 32 degrees celsius outside that day. Quite humid. The heat inside must have been INSANE. No wonder most of the crew wore masks!! It must have been quite toxic to breathe (litterally).

I now have a whole new level of respect for everyone who was involved in the movie on day 8, 9 and 10 of filming!
He also said that the main area where they filmed was a dining room, with walls torn apart, and blood splatters everywhere. And what we could see when walking in front of the entrance is a really cool room with stairs (oops!) and a really gorgeous chandelier. Clearly the look of the space will be really really perfect! (Even if there are stairs).

At some point, someone (some more fans got there around 9PM) noticed that one of the windows on the upper floors on the side of the building was lit in some kind of blue light. Since this building is abandoned, we were all curious, and sure enough, we could see shadows walk by, and even hear strange noises and screams coming out of it. Pretty wicked, can’t wait to see it!

During that time, on the stunt front, every stunt person (including the stars’ doubles) were getting busing getting mats out of their trailer. (So I was really costume-happy there.) They however stopped at some point after a stunt looked like he had some kind of injury on his foot or knee. So everything was packed back inside the trailer.

(Notice the green of the shoes?)

We still had some cool moments though, like when Jemima’s and Kevin’s stunt double had a kick fight. 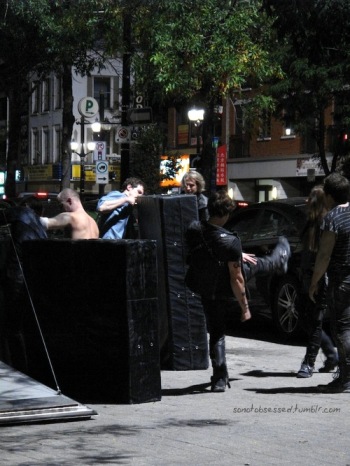 It was getting pretty late at that time, and cars started moving. I was all excited, but I really needed to go since the last bus to Toronto was leaving in less than 15 minutes.

I was told afterwards that nothing much happened after I left around 11:20PM, and by 12:30 AM the stars had left without signing, and not outside scene with them had been filmed.

It was a pretty long day, but I seriously wish I lived near Toronto so that I could experience a bit more of them before filming wraps!

Thank you Amelie for sharing your amazing experience with us!