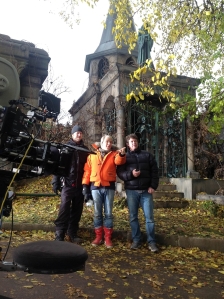 I do know that our trailer is tied to Breaking Dawn. This could mean that it will be released with the trailer in all territories. But I’m not sure. There is a teaser, yes.

On working on the film:

I am very involved. I am editing every day with my editor and follow every step until the movie is released.  I use both FCP and AVID. I think both are great.

On filming in New York City:

I will go there shortly to film exterior shots.

It’s a hard question to answer.  Obviously I really enjoy this project and love working with the actors.  We have to finish the first one before we start thinking any further.

On the possibility of a London premiere:

I think so. With so many great Brits in our cast, I think we have to have a premiere in London.

Romantic, Magical and Smart.   I think that covers it.

On taking on a big project like THE MORTAL INSTRUMENTS:

I must admit I did not know how big it was.  And I think it was a good thing, because I wanted to do the movie because I liked the material - not just because it was already huge.  It’s better if you do something because it really interests you, and not because it’s a good bet.

On condensing the source material for the film adaptation:

You have a good question – it’s very hard to put a great book like TMI into a movie. There are so many ideas and stories and they can’t all fit into one movie. We had to make hard choices all the time.

Advice for those interested in working in the film industry:

There are many alternatives for amateurs these days. You can edit on your computer, you can use your phone as a camera etc.  There really is no reason to not just start making films. Sometimes you can find yourself planning, and planning and dreaming, but until you just go out there and start, nothing really happens. So my advise is just to get going. You’ll figure it out as you go. That’s the best way to learn.

On whether the cast has already taken promotional photos:

They already have. The producers and movie studio are doing a great job with all this. They will release all this when they think the time is right.

I don’t know, and I can’t really tell you yet.  Sorry.

On the possibility of a premiere in Italy:

I will find out. I would love to have a premiere in Italy.