Director Harald Zwart took an hour to answer fan questions related to THE MORTAL INSTRUMENTS: CITY OF BONES on Friday (Nov. 16). He addressed many topics related to the movie, including on set secrets, his favorite character and just how many times it took Jamie Campbell Bower (Jace) to slide over that cop car hood (the answer: only once). Has he read the books?

Yes, and I love them.

On the best part about filming:

Every day we had fans waiting for us outside the set. That gave the whole shooting experience an extra boost.

On his favorite character:

It's hard to say. I love that big scene with Dorothea. She's a great character.

On who says: "There is a map inside your head Clary" in the trailer:

Those words are coming from Magnus.

On where he got the idea to give Isabelle a flamethrower:

It was an image I liked and it seemed to fit Isabelle. It works great when she’s fighting at the end.

On how Geir Andreassen chose the look/lighting and color palette of the film:

Thanks. Geir is very talented. We looked at many movies together and worked out a palette and lighting plan.

On which character he finds the most interesting:

I love them all. Clary is brave. Jace has a great character arc. I think Hodge’s complex psyche is very interesting.

On when we’ll get photos of Magnus (Godfrey Gao):

Hang in there. They will be worth the wait.

On his favorite set on the film:

I loved shooting in the Library. The set was inspired by Jules Verne. City of Bones was amazing as well. 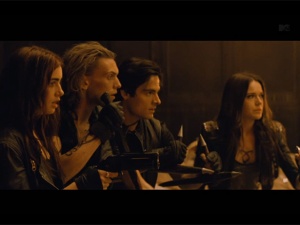 On staying faithful to the book:

When you make a movie you always have to make some changes. We worked closely with @cassieclare. She’s great.

On what inspired him to become a director:

I lived in Norway far from any movie industry and made my first film when I was 8. Star Wars sealed the deal.

On the costumes being specifically made for the film:

Yes, most of it was designed and made for the movie. Gersha our designer is fantastic!

Did Jamie Campbell Bower do most of his stunts:

Yes, he is amazing.

On a London premiere for the film:

We would love to come to London. Many of our cast are British.

On would he ever direct the new Star Wars:

On his love for the MORTAL INSTRUMENTS fans:

TMI fans are the greatest. Thanks for the homemade cookies. I love you all.

On the cast going to Brazil:

On who the creepy little girl is in the trailer:

You’ll have to see. She was a great actress.

On his familiarity with the runes:

Yes, I know them all pretty well.

On what series he was a fan of growing up:

Hitchhiker’s Guide To The Galaxy.

On possibility of a premiere in Italy:

Sure. I love Italy. I shoot commercials there all the time.

Describe Robbie Sheehan in one word:

On his favorite setting of the movie:

I loved shooting the greenhouse.

On Simon and Isabelle as a couple:

They are a perfect couple, aren’t they? They just don’t know it, yet…

Describe THE MORTAL INSTRUMENTS: CITY OF BONES in one word:

thrillingactionepicromancescarecharacterdrama – does that count as one word?

From the first day we had a great time. They are all very professional and the sweetest mundanes.

On how he felt once filming ended:

It ended yesterday, so I don’t really know yet. I know I will miss it. It’s been a great experience.

On plans of the other MORTAL INSTRUMENTS books becoming movies:

I would love that.

On how many times it took Jamie to nail the sliding across the cop car hood (in the teaser trailer):

Three takes. The first one was great. The rain made it more complicated for the camera so we did a few more.

On who he would play in the movie:

On which scene was the most fun to film:

We had a lot of fun with Hotel Dumort.

On who came up with the idea to put a rune in Clary’s coffee (in the teaser trailer):

Thanks. That was my idea. It came after a creative conversation with my brilliant conceptual artist Nikolai Lockertsen.

On which cast members made him laugh the most on set:

Lily and Jamie made the crew laugh many times. Lena got the giggles when she was fighting with a frying pan.

On his favorite rune:

I like the design of the rune of quietude.

I identify most with Hodge.

He forgot to put on his pants.

Did he know how big the MORTAL INSTRUMENTS fandom was and about the immense fan support:

Now I know and share your passion. Personally I chose the material because it’s cinematic and a great story.

On THE MORTAL INSTRUMENTS: CITY OF BONES composer Gabriel Yared:

We’re very happy to have Gabriel Yared. Listen to his music and you’ll understand.

Thanks to Harald for taking time out to answer fan questions.