Last week the book trailer for Clockwork Princess premiered to much fan fervor and we've been rolling out exclusive interviews with director Charles Haine and trailer Jem, Yoshi Sudarso. This time we're bringing you an exclusive interview with our book trailer Will Herondale, who was played by Skyler Hart. Skyler also just happens to be good friends with Yoshi. Real life friends playing parabatai--how cool is that?! Check out our interview with Skyler below: Can you tell us about the audition and casting process?

I got involved with this project just like any actor does; by auditioning for the role and giving it my all. I was submitted through one of the big casting sites and was lucky enough that Cassandra and the casting team chose me to portray Will. It was funny because I was on hold for three different jobs the day this filmed. One tv and one other commercial but luckily it worked out and I got to do this one and play such a cool character. 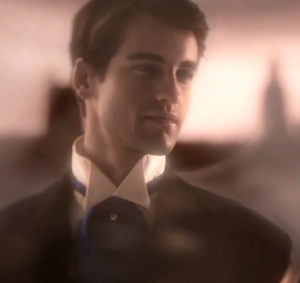 What did you know about The Infernal Devices before filming and what do you know now?

I didn't know too much about the series before we started filming except what I got from a few basic web searches. I only had time to briefly go over and find out who this character was online and on set while shooting. Since then I have done a lot more research and talked to people who have read the books to find out more about this incredible fictional world. It was pretty cool to see how many die hard fans Cassandra and this series has.

What were you told about Clockwork Princess and the relationship between your character and the other characters?

Again I only vaguely knew about my character and the others before coming to set on the shoot date. Charles and the production team had outlines of the book so they tried to explain it and make the scenes as clear as possible for us actors.

How challenging was it to portray a character from a different time?

I didn't really look at the time difference in the character as an obstacle to playing him. Love stories and the emotions humans feel are timeless and cannot be changed by the clothes we wear.

What was it like shooting with the other actors?

Shooting with Kiersten (Tessa) was great. I think she said she was a little newer to acting so I tried to give her a little industry advice on getting more into it. Overall she was a real sweetheart to work with and did a great job as you can tell. I did NOT get to work with my real life buddy Yoshi, as they had a different actor playing his part the day that I shot.

Were you able to relate to Will?

Totally. Me and Will have quite a bit in common when it comes to personality. I have a reckless part of me that Will seems to live by most of the time. I am also extremely stubborn and tend to hide my emotions from others.

What do you think of the finished book trailer? Were you surprised to see a different actor for Jem?

I thought it was great. The production company is incredible and were actually nominated for an Oscar on a short this year. I wish it could’ve been a little longer so we could have shot more scenes! You know its funny, I had actually met up with Yoshi (Jem) the day before he shot his parts to grab lunch and catch up. We have worked on numerous projects before and on a tv show, so were good buddies and try to stay in touch as much as possible. When we were going over some recent projects we’d worked on and I mentioned the book trailer, he told me he was shooting the same one and he was recast as Jem! It was too bad we didn’t get to be on set the same day of shooting cause that would have been a lot of fun!

What did you enjoy most about filming?

The whole filming process was a lot of fun. Everyone was cool to work with and we definitely had a little time goofing around between takes. The director Charlie might be my favorite I’ve ever worked with so far (And I’ve worked with a lot!). He is such a funny guy and very talented. On some of the takes of the scenes with me and Tessa, he would call “cut” in this really excited drawn out tone and me and Kiersten (Tessa) would crack up every time!

Has being in the trailer piqued your interest in the series and will you read the book? Why or why not?

I think I might get my hands on a copy!

I think I will read the books to Yoshi!

Thank you again for the interview, Skyler!

You can check out his acting profile here and our exclusive interviews with director Charles Haine and ‘Jem’ actor Yoshi Sudarso here and here.

CLOCKWORK PRINCESS will be released in 21 days!