Cassandra Clare's Clockwork Princess book tour stopped in Mission Viejo, Calif., on March 22. Our friends at TMI Fandom were at the event and shared this video of Cassie's Q & A, as well as transcribed it:

Check out their transcription under the cut: 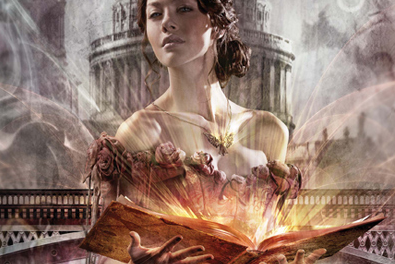 02:35 – The last two characters that appear in the epilogue [of Clockwork Princess], will we possibly see or hear mention of them in your next trilogy, The Dark Artifices?

03:30 – Cassie, I’ve always wondered, where did you get the inspiration for your books?

Cassie:  I got the inspiration for the idea of shadowhunters from a friend of mine who’s a tattoo artist, and was telling about the history of tattoos, and I guess people used to believe that kept you brave, and kept you from getting injured, and I starting thinking about how cool it would be if there was really a race of people for who these tattoos really worked and actually protected them.  That was really the development of the idea of shadowhunters. And each kind of series of stories has had its own separate genesis.

04:40 – Is there any possibility that [Simon] could end up with some beautiful Shadowhunter in marriage?

Cassie:  Well, Alec is getting over Magnus right now. (audience laughs)  But they have a very special moment in City of Heavenly Fire that I think no one is expecting.  (audience reacts audibly)

05:28 – How does it feel to know that you’re influencing people everywhere?

Cassie:  Terrifying.  I consider myself a very weird person.   By and large I think my readers are incredibly empathic, nice, generous people, great with their feedback and I love interacting with them and talking with them online and I always feel like it’s kind of a group experience when the book comes out.  I have the trauma of seeing how other people are going to take it and they have the trauma of actually reading it.  So, we come together to love each other.

06:44 – Is it possible for a warlock to be half werewolf or vampire?

Cassie:  (Essentially Cassie’s answer is no, at least not in the Shadowhunter world.)

Cassie:  (Speculation and joking on something about touch football when she was kid, then “my dad got me a computer when I was twelve, and that got me interested in writing.”)

10:05 – Which of the cast of characters would you guys say you are all most like?

13:39 – Is there a possibility of Simon getting his own series?

Cassie:  I don’t think it’s very likely that Simon is going to get his own series.  I’m really excited about The Dark Artifices I’m writing out right now.  And them who survive The Mortal Instruments, we will see them in The Dark Artifices, and that could well be Simon who might survive.  And then I also have an idea for the next generation of Shadowhunters that come after the kids in Clockwork Princess, so I would really like to do that.

15:29 – On the cover of Clockwork Princess, Tessa is holding a book.  What book is that?

17:09 – Which series did you like writing more: Mortal Instruments or Infernal Devices?

Cassie:  I liked writing them both, just because they’re completely different.  I loved the research that went into writing The Infernal Devices, I loved the language of that era and writing these sort of beautiful speeches that the people could give. I just love the feeling of that time period.  But Mortal Instruments was my first series.  I have a love for those characters and they are like my family, so I’m always excited to go back and spend more time with them, and it will be traumatic to kind of finish City of Heavenly Fire and be done.

18:05 – In the beginning of Clockwork Angel, when Will interrupts Jem and Tessa’s first meeting, why is his hair really wet?

Cassie:  (Theories by Sarah are stated first.)  I think Will just kinda likes to be wet, I noticed he’s like wet in every book.

20:11 – Someone asks which actor plays most like the character in her books.

Cassie:  It’s different.  Because I know them all, it’s like picking amongst your friends.  They’re all such great people.  I’m just going to go through them…

Jonathan Rhys Meyers is the most intense.

Aidan Turner is the nicest person in the whole world.

Jared Harris is super smart and has awesome stories about British actors (she mentions that Jared’s father was Richard Harris, who played Dumbledore in the first two Harry Potter movies,)

Lily Collins and Jamie Campbell Bower are perfect as Clary and Jace stating how their personalities match up.

Cassie:  (Regarding Robert Sheehan, basically yes.  Cassandra explains her how she knew of him.)

24:10 – What was your favorite book to write in all of the Mortal Instruments and Infernal Devices series and why?

Cassie:  (She tends to pick the book that she’s working on at the moment, so) City of Heavenly Fire right now.

24:53 – What inspired you to write about demons? Have you always been interested in them?

Cassie:  They were designed by the artist who first inspired the whole idea, her name is Valerie Friere.  And I asked her to do a set of 80 runes for the Grey Book, and I just came up with what would be useful, healing, strength, precision, courage, and then some more specialized ones like the ones for marriage and love and mourning.  I did not design them visually, but I think she did a really great job.

Cassie:  I can’t be on a team, because you can’t root for a team if you know who wins.  And if you control it, whoever team you want to win will win.  I love them both.  I love Jem.  I love Will.  I love them in different ways.  I love how they both love each other.

27:32 – What are you guys? Like Shadowhunters, mundane, downworlders, what?

28:30 – What would be your advice to aspiring writers and people who are facing difficulties in realizing their dreams?

30:55 – From the Mortal Instruments series, who would be your best friend?

Cassie:  There’s a story on my website called ‘Why Will Hates ducks.’  If you go on my website and read it, you’ll find that Will, in fact, was stalked by a duck.  (Cassie then explains her personal reason to why she hates ducks, which was the basis for the story of Will hating ducks, as she had fed mallard pie to Mallard ducks in Hyde Park.)

Cassie:  (Sarah Rees Brennan says something that is totally inaudible)

33:59 – What was the most inspirational book you’ve ever read?

Cassie:  Lord of the Rings

34:05 – Does the obsession of your tumblr fans ever scare you?

Cassie:  (answer indistinct to me)

34:48 – How does Tessa’s clockwork angel wind up in the New York Institute?

Cassie:  (Basically, read Clockwork Princess, and you’ll figure it out.)

Cassie:  I always wanted to write a Jewish vampire.

Cassie:  I didn’t want to make their relationship as too perfect.  Everybody else in the books have relationships that have trouble, they have stuff that goes wrong, and I feel like they were way too de-normalized.  They’re not relatable, and I want them to be like this is a relationship, a real relationship, and it’s really, for Magnus, the most important relationship he’s had in hundreds of years.  And the fact that it is so important to Magnus really scares him and that’s part of why they did break up.  But there is a whole other book to come.  (Someone interrupts Cassie and yells that they’d better get back together, to which Cassie says that the storyline is) definitely not over.

Cassie:  What is the point of a ship if not to sink it?

Cassie:  I love them both.  Tessa is much more like me, but I really like Clary for how brave and reckless she is.  She is more of a risk-taker than I am.

36:57 – Do you actually eat or do you survive solely on the tears of fans?

Cassie:  I like to take the hearts of my readers and freeze them, and melt them, and then I pour it in a cocktail glass and call it a heartini.

37:43 – Could not hear the question, but it’s basically about her involvement in the movie

Cassie:  They’ve actually given me a pretty good amount of input.  They’ve definitely asked me questions.  They wanted to know things about the world, and being curious.  And definitely, I was involved in the casting.  I was definitely not the last word on anything that happened and I haven’t even seen the movie, and I couldn’t tell you how it ends.  I don’t know, but I did appreciate the amount of input they did give me.

38:20 – Which character was the biggest challenge for you to write?

Cassie:   Jem.  I knew a good amount of the Victorian era, which is why I wanted to write them, but I didn’t know that much about Victorian Era Shanghai.

39:11 – Question for Sarah regarding Unspoken and if she was always planning on ending it that way.

Cassie states that at WonderCon (Anaheim Convention Center – March 29-31, 2013), they will present a 3-minute trailer, which she has seen and claims it to be awesome, with some great footage and great scenes.  They will also be showing the poster.  Jamie Campbell Bower, Lily Collins, and Kevin Zegers will be there with her and director Harald Zwart.