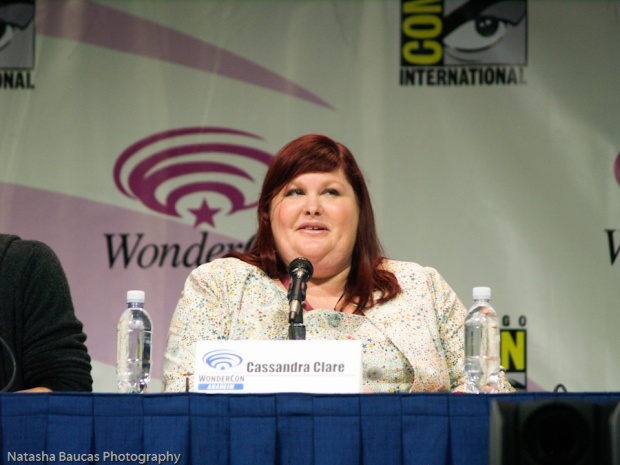 Cassandra Clare spoke with Crave Online at WonderCon last month about The Mortal Instruments: City of Bones, including being open to interpretation on the adaptation, being there for the actors on set, working with Harald Zwart and more.

CraveOnline: When Hollywood started buying teen literary properties, did you bide your time and lord over this series while entertaining suitors?

Cassandra Clare: I didn’t. I was actually pretty early on the scene. I sold my books before Twilightcame out and so when we put the books out for movie studios and what not to buy the rights, YA was a pretty unknown phenomenon. People weren’t really sure what to do with it. It got bought by Unique Features and Constantin. They just really loved the story and they were on the same page with me, so I didn’t lord it over them. I didn’t wait and entertain suitors because there really wasn’t that kind of feeding frenzy back then. Now it is which is really interesting to me, but no, they’ve had the property for five years.

So did they shop it around and take it to different studios before Screen Gems?

They did but Robert Kulzer, who is the producer at Constantin I’ve worked with the most, has a long term relationship with Screen Gems and Sony. They’ve done the Underworld movies together and I think he felt like they really had a handle on urban fantasy, so I think they were his first pick. Fortunately they got on board.

Do you need the movies to be strictly faithful to your books, or are you open to some interpretation?

We know from the trailer they have the nightclub scene, right?

Oh yeah, they definitely have the nightclub scene. I’m excited about that.

Oh, it’s very surreal because you’ve only ever imagined it and then suddenly there it is, coming to life on screen and you’re like, “Wow, somebody crawled inside my head and pulled out all this stuff and put it up on this big screen for everybody to see. It’s really incredible.

Were there certain scenes that they had to have in the movie?

Yeah, there were certain scenes that I really, really wanted them to keep in the movie. The scene where Clary and Jace first talk, the marine house scene which is the romantic scene, and Magnus Bane’s party which is my favorite scene in the book. I really wanted to make sure they got that.

Are all of those scenes in the final cut?

Were there some scenes you were okay with them leaving out or consolidating?

There were some scenes where I understood why they were consolidating. There’s a big set piece scene that’s a fight in a hotel between Shadowhunters, werewolves and vampires. In that scene in the book, it’s only Jace and Clary. They brought in the other characters, Isabelle and Alec, played by Jemima West and Kevin Zegers. I understood why they did that because I feel like they wanted to make sure that the other characters were equally present and gave the audience more of a chance to bond with them. So changes like that I’m fine with.

When you write, do you think about traditional structures like the Joseph Campbell hero’s journey?

Yeah, definitely. I read Hero with a Thousand Faces and The Golden Bough and all of that stuff before I started. I really wanted to write a hero’s journey book that hit all the beats of a hero’s journey but make it about a girl. That was something I wanted when I was growing up.

Does that apply to book one, or is it expanded over the entire series?

It really arcs over the first three books. Fingers crossed, I’d love for them to get a chance to make all three of those movies because I feel like they do form a set.

Well, there are six books but they’re actually two separate trilogies. It’s trilogy one and trilogy two. As long as they make the first three, right? That’s not asking for too much.

Why did you decide to call humans “mundanes?”

Because I have a lot of friends who play Dungeons & Dragons and they were really helpful to me when I was working out the magic system for the books because I would say, “Would this kind of fighting work? Would this kind of fighting work?” They always call people who don’t play Dungeons & Dragons mundanes. They would say, “Well, a mundane wouldn’t understand this but this is how this kind of magic works.” I just thought it was such an enchanting way of looking at things that I took the phrase.

Is it even worse than being a muggle to be mundane?

What about setting your stories in the real world world of New York?

I think that’s one of the things that’s really fun about the movie actually because I was talking to [director] Harald [Zwart] about instead of taking the characters and removing them from our recognizable world of cell phones and iPads and street traffic and taking them to another location, like far away, like Hogwarts or Camp Half-Blood or something like that, you stay in the gritty urban milieu. But the magic is there at the same time and that’s something that I’ve always loved about really classic, old fashioned, urban fantasy.

Did you get to be on the set?

I did. I visited the set a whole bunch of times actually. I flew back and forth, up and down from Toronto visiting the set.

In any official capacity as a producer or consultant?

I’m not a producer or consultant, I don’t have an official title. They were just very open to having my input and they were nice enough to fly me up and back down. I would sit down with Harald sometimes and talk about when he had questions about set issues. Would this go there? He always wanted to talk about the magic, the rules of the magic, the runes, how they would work. So I sort of was an unofficial consultant wandering around. Mostly I was having fun.

Did Lily Collins or Jamie Campbell Bower ask you questions?

They did ask me a couple questions. I tried to never ever come up and offer them any kind of opinion unless they specifically came up and asked, because I felt like they really had to occupy those roles and be those people and make their own decisions.

What would they specifically ask you?

Jamie asked me how old Jace was, at certain points in his life when he learned certain things. I don’t want to spoil things in the movie but he tells some stories about things that happened in his childhood so he asked me approximately how old he was when those things happened to him, that kind of thing. Just a way of building up the character’s backstory.

It occurs to me, I did my research for this by reading the Wiki and some other things about your book. As an author, does it bother you that the entire synopsis and plot summary is out there like that?

It does a bit because I feel like people could just go and read it and then they’re going to know everything that happens, so they get spoiled. I try to answer all my fan mail. Sometimes I get questions from people who obviously only read the Wiki but haven’t read the books. I’m like, “But you have to read the book or you’re not going to get it.” But I guess it’s a free country. If you want to read the whole synopsis, you can. It’s not the same as reading the book.

I suppose that’s exactly what I did unfortunately, because I only learned about this interview a week ago, and I’m not a fast enough reader to read a whole book in a week.

Well, sure, you’re doing research, so… It’s a lot of pages. [Laughs] I actually think it’s probably useful to have it out there for research, and people who’ve already read the books use the wiki a lot to go back and touch base. It’s a really complicated mythology. It’s a big, sprawling world. They’ll go back and check and see who’s related to who and what happened when.

I’m going to need it just to spell the names right.