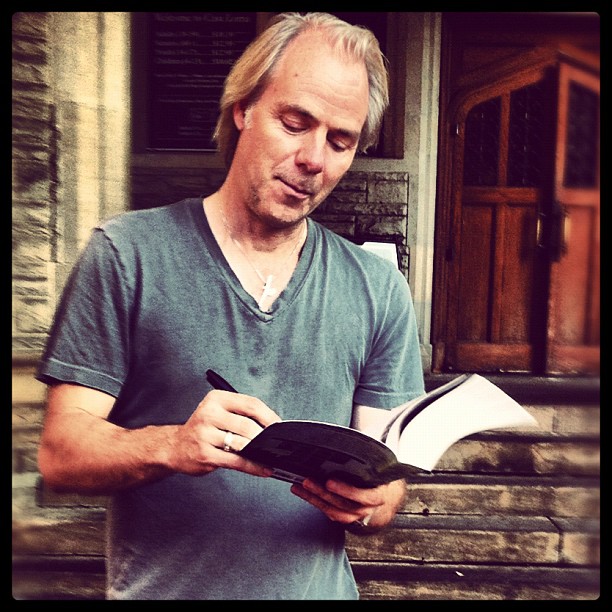 What was your favorite part about filming in Toronto?
It reminded me of a European city, so after filming, there was always a great place to go and have dinner or just walk around the streets of Yorkville. I just really fell in love with Toronto as a city.

Do you believe in “monsters, nightmares and legends whispered around campfires,”—as heard in the movie?
(Laughs) That’s a great question! Well, I do now!

What made you change your mind? Was it the movie?
Yes, after exploring the idea that us humans, we are limited in our perceptions—we don’t see everything that’s around us—I do believe that there’s more between heaven and earth than what we actually have the capacity to take in.

There are so many movie adaptations of novels being released right now, why did you choose to be a part of this one?
I just really liked the tone of the book. It’s got a good blend of humor and it takes the characters seriously. I think the journey of Clary, who is kind of in a detective story, trying to figure out her own mind—I thought it was wonderfully, psychologically complex and I know that young people are so smart that they can easily be challenged by these things, but they’ll all get it.

What makes a novel fit to be turned into a movie?
I can only speak for this one, but the way Cassandra writes is very visual. Once I start reading it, all the images pop into my head and all these wonderful places that she is describing and the portal. It’s just the mood of the whole thing, just lent itself to any visual inspiration. Look at what the fans have been doing for years! It’s clear that this book has inspired young, creative fans all over the world to keep making their own movie posters, their own version of the movie trailer—so they all seem to be very visually inspired by this.

There are a lot of fans of the book who are excited for the movie. Is there any pressure around this book-to-film?
Yeah, I think there is…we try not to feel the pressure, but still respect what we think they are expecting. You can’t really follow the market. I still do what is right for the movie because after all, it’s a movie. And, I think the fans will love it. I think so far, the response has been really good and I feel confident that they’re going to really enjoy what we’ve done to it.

How closely did you work with author Cassandra Clare?
I was very lucky because Cassandra was very easy to work with. She understands filmmaking and she understands that it’s hard to take a book of that size and squeeze it down to a movie. So we were working really closely with each other. She knows her fans very well. I was actually at a book signing, I was invited along—she was very generous to bring me along—and I was surprised see the young fans, but she also has fans of all ages. She has a good, mature—what I mean by mature is that even though they might be in their mid-teens and upwards, they are very developed and smart people. They ask really smart questions and I was thrilled to see that our target group was ranging beyond what we thought it was initially.

The books are pretty long and there is never a dull moment, how did you decide which scenes would be cut?
That’s a really tough one. That’s a process we go through almost up until we have to lock the picture. You know, we go back and forth, we screen it for people, we look at it ourselves and eventually the movie takes a life of its own and in the end, it’s kind of apparent what scenes should stay in. But as you can imagine, if you condense a book with—like you said yourself—never a dull moment, if you condense that down to a movie length, that movie moves along very nicely.

How important were the details of the set, which I heard are absolutely breathtaking?
That is always important to me. I think that if I don’t believe that the place actually exists, then I don’t think people who see the movie would believe it could actually exist. So, I was lucky with a great production designer, who I also used on Karate Kid, Francois Séguin, who is a true artist and we just made sure everything was as if it had been there for hundreds of years and everything was there for a reason.

In the future, are there any movie genres you would like to take on?
I wouldn’t mind slowly moving into a more science fiction-oriented direction and I would love to sink my teeth into any Star Wars spin-off franchise, that would be fun to do.

Is there anything you would like to add about the movie?
I just think people will be really surprised. I think middle-aged men will enjoy the movie. It’s a thrill. We had a great screening where the boys said it was plenty action for them and not too much of what they call the schmaltzy romance. And then the girls were vice versa, they had plenty of what they wanted to see with relationships and they really enjoyed the action. I think we’ve just got a really good balance.