MTV caught up with our Jace Wayland, Jamie Campbell Bower at WonderCon on March 30, where the Mortal Instruments: City of Bones actor talked about his love of science fiction and fantasy and even joked about staring as a young Gandolf in his next role, as Jamie has had roles in a number of prominent franchises, including Harry Potter, Twilight and now The Mortal Instruments. 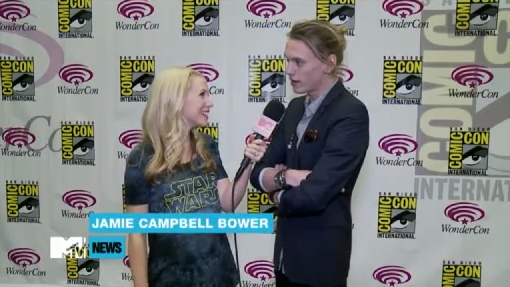 Click the image to watch the video at MTV.com

Jamie talked about what it is that makes science fiction and fantasy so special.

“What I love about the whole notion of sci-fi and fantasy is that it’s a comletely different world, but underneath everything, there’s a sort of reality that grounds it,” he explained. “And people love to be taken out of their daily lives. I don’t want to use the word ‘mundane,’ but that sort of drudgery, sometimes. Sci-fi and fantasy offer that. It offers that of the person watching it and for me, which I love.”