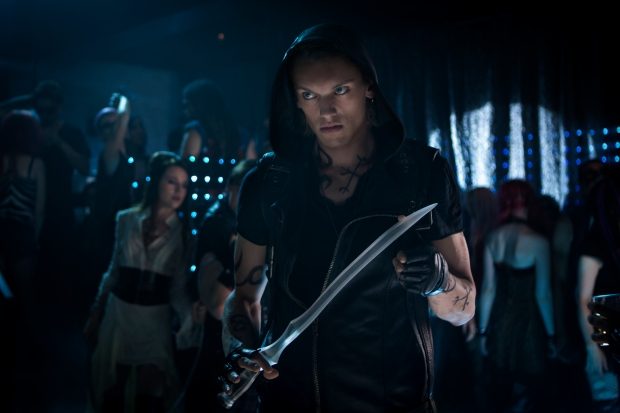 MTV’s exclusives from the set of The Mortal Instruments: City of Bones continue.

On Wednesday, MTV introduced us to Jace Wayland (Jamie Campbell Bower) and the cocky and snarky Jace we’ve all come to love.

When MTV News visited the set of the urban fantasy (based on the best-selling novel by Cassandra Clare), the actor was quick to affirm that while his character is something of a jerk, it’s a role he’s relishing.

“What I love about him is the fact that he’s actually a bit of a douchebag,” Bower said during a 3 a.m. interview on the Toronto set. “He’s not like a meathead, he’s just sarcastic and rude.”

And for good reason, as fans of the series can attest. Jace has a complicated background (one we’ll leave vague to avoid spoilers), but suffice it to say, this history has gone a long way towards making him the oft-prickly character he is today. Bower commended director Harald Zwart for capturing not only Jace’s moodiness, but that of the monster-ridden world in which he and his fellow Shadowhunters exist.

“I think there is a darkness that Harald has brought to the piece that is easily lost in adaptations, particularly of YA novels,” Bower said. “And there’s a reality to it, as well, which is nice. You know, it’s very easy to go into fantasyland too quickly — he says wearing a dress, effectively. Every girl’s got to have a little black dress — that’s how I look at it.”

Of course, it takes a lot more than black garb and strategically placed runes to embody the Nephilim.

“There’s a lot of physicality to the role, as well,” Bower continued. “Which has been difficult to prepare for, absolutely, but it’s paid off, which is great. Like, not eating cookies is so hard.”

And if you have any lingering doubts as to how effectively Bower embodies the mercurial teen, well, author Cassandra Clare is happy to attest.

“Personality-wise, Jamie is exactly like Jace,” Clare said. “It’s actually like interacting with Jace, talking to him. It’s a little bit creepy.”

The Mortal Instruments: City of Bones hits theaters on Aug. 21.

What is your favorite thing about Jamie as Jace? Sound off in the comments!

23 Comments on MTV introduces us to Jace Wayland of ‘THE MORTAL INSTRUMENTS: CITY OF BONES’