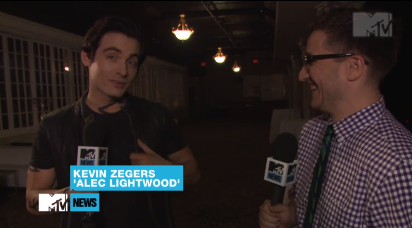 Fans of Cassandra Clare’s The Mortal Instruments know that Shadowhunters look better in black. MTV.com has just released a new set video where the cast (Lily, Jamie, Jemima, Kevin and Godfrey) as well as Cassie and Harald Zwart talk about the clothes Shadowhunters wear and reveal that it’s “all about the leather”.

Harald Zwart on the Shadowhunter look:

“How do you find a kind of goth, leathery look that hasn’t been done a million times before and not too S&M and not too this or that?” (…) “It’s search and find.”

“It’s very sexy. It’s very edgy. It’s not costume-y. It’s very much a look,” star Lily Collins — who plays Clary Fray — explained of the Shadowhunters’ gear, which she sports later on in the film after learning she’s not as mundane as she once thought.

“They’re kind of a pain in the ass to put on in the morning,” bemoaned Kevin Zegers, who plays Alec Lightwood.

“It takes about three hours,” confirmed Jamie Campbell Bower, who plays Jace Wayland. “We’ve managed to cut it down to about two and a half hours now. I will sleep in them sometimes. I won’t shower. I’ll stay in them, and then you come to work the next day, and it cuts down about two hours in the chair.”

And of course you can’t talk about fashion and not mention our glittery High Warlock of Brooklyn, Magnus Bane. Godfrey Gao:

“I’ve put on glitter, eye shadows, nail polish, really glittery lipsticks, and I think I do have the red-powdered cheeks going on,” Gao said with a grin.