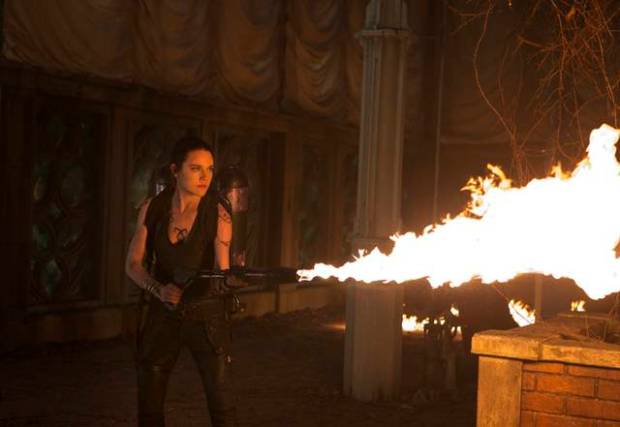 Jemima talks about the biggest challenge she faced, why Isabelle is a role model for fans, how much family is important to both her and Isabelle and teases her favorite scenes with Robert Sheehan (Simon).

Q: The cast – you guys all seem so close. I think that’s one of the things that has come across when we see you off screen, but also when we’ve seen you on screen. What’s your favorite memory from shooting?

J: There are lots and lots of memories. We were together a lot and waiting between takes and going through really long and hard days. I think the moment we all got most crazy giggly was when we were filming the Dumort scenes because it was just ongoing action and very long tiring days. We were doing it all and having so much fun, but we were in this sort of weird, abandoned hotel just outside Toronto all together. And we just – I don’t know, something happened or there was something in the air that made us all crazy [laughs]. We had the most fun of times. It was crazy. Most of the time it was just great. We were all like a family, really. I arrived and Lily [Collins] was so kind and so open and so was Jamie. It felt like we’d known each other forever and that’s thanks to them. They’re the leads and they opened their arms to us. We were very grateful to them.

J: The action [laughs]. The fighting, that was the hard thing because I’d never done that before, but also one of the most exciting aspects. I think the hardest was to make it feel like it was natural and innate that she was a fighter.

Q: Isabelle is a fan favorite and she’s also a big inspiration for so many female readers. What are your thoughts on that and why do you think Isabelle means so much to the female fan base?

J: She appealed to me a lot. Her strength and she’s so faithful and committed and she’s in a world of men and has to fight for herself, fight for the others. She’ll do anything for it. What I like about her is that she fights and goes on fighting and sometimes forgets about her own self and how sensitive she is. And that’s what happens when she just falls in love and her sensitive side comes up. It makes for something quite funny because she’s full of contradictions. She wants to stay this strong Izzy but deep down she’s just dying for some affection and love. She’s quite a role model because she fights for the ones she loves.

Q: With Izzy, her relationship with her siblings and just family in general, it’s a huge thing for her, and like you said, she forgets sometimes about herself and focuses on her family, did you take from yourself personally or from previous roles that you have done and applied it to the role of Izzy.

J: I am sorry, I don’t really understand. Is there anything I used from my other characters that I brought to Isabelle?

Q: Yeah, in terms of how much she loves her family.

J: My other characters I played were quite different then Izzy. I think the love of her family is quite familiar to the love I have for my own family, as a human being, as Jemima. It’s funny, cause I was talking about this reminds me that Lily is very close to her Mom and Clary goes looking for her Mom and I think all the actors portraying these characters are all very family oriented. And that’s also too what sort of bonds us as actors and helped us bring all these characters to life and bring their own bonds between them.

Q: The fans constantly badger us about asking about you and Robbie.

Q: They love it. They absolutely love you and Robbie. They go crazy for pictures.

Q: What was your favorite scene to film with him, just in terms of banter and chemistry?

J: There were so many. There were so many little moments. Often we’d be sort of going, running through halls, and he was running behind, and he made me laugh so much. But we also had a funny scene where I take him around the institute, that was really good fun. There’s lots more to come which is even more exciting.

Q: I noticed that you said that you had never done action before, action quite like the Mortal Instruments. When I watched the film, you stole the film for me, so it’s incredible that it’s your first time doing something like that.

J: Well it was my first time, and it was so much fun. We had the most amazing stunts coordinator and team. We had a physical fitness trainer. We applied ourselves really hard. But we were also really, really well taken care of and taught, so we were in the best hands possible.

Q: We talked about role models earlier and Isabelle is such a great role model. She has this amazing strength and loyalty. There is definite girl power going on. What would you like to say to the young girls that look up to you and see you as their role model?

Q: We keep getting asked by fans this question – and we have already asked Lily, Kevin, and Jamie. So they really want to know, who your first celebrity crush was or is?

Q: Do you know all the words to their songs?

J: Uh, Ya! I would sing, but I don’t know how to sing, but that would be kind of awkward. But I love the Spice Girls.

Q: What do you most look forward to, in getting deeper into your character Izzy? She really kicks butt. We see a lot of action, but what are you excited to reveal about Izzy to the fans on a more personal level for Izzy?

J: I think maybe her sensitivity. That she’s going to open up to love and to a new friendship and almost like a new sister. It’s going deeper into her relations to others that I am looking forward to.

J: I don’t have twitter and I don’t know. I cant say. Not yet. Maybe. It’s a hard question. I am not quite sure what I think of twitter and facebooking yet. But it could be, we’ll see.

Q: My next question is about Robbie. In the future will there be a gag reel? They have enough footage of Robbie cracking all of you up?

J: Possibly. Well I have got a lot of memories of it anyway. I don’t know if they got it on film, but we do have a lot of funny moments. Not only Robbie to be honest, Lily is hilarious. Kevin and Jamie are so funny as well. It was all of us non stop, but ya Robbie is non stop. He’s the most out there funny person, but the others are very subtle funny as well.

Q: You talked about your love for your family, and that being brought into the film. How do they feel about you being part of such a large franchise here in the United States.

J: I think that they are very happy and proud. Because I think they feel that I am living my dream as an actor, which you know is to be able to perform exciting roles. But if I were doing anything else, they would be equally happy if they knew I was happy. My siblings are sort of scattered around the world and they see posters of The Mortal Instruments and go ‘Ooooh, oooh’. So it’s quite cute.

Head to Fangirlish for Part 1 and Mundie Moms for Part 2.