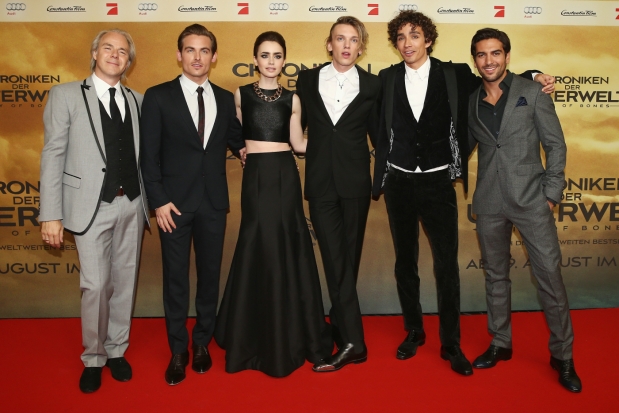 After already attending the world premiere of The Mortal Instruments: City of Bones in Los Angeles on August 12, we also attended the European premiere in Berlin on August 20. Shadowhunter runes, reading samples of City of Bones and ice ceam were given to the fans to sweeten the waiting period and we even chatted with fans who came all the way from Italy and who had waited at the cinema since 4 am!

We stood right at the end of the red carpet and were able to talk to Cassandra Clare, Jamie Campbell Bower, Martin Moszkowicz and others before they entered the cinema.

While talking to Cassie, she told us that her luggage with her premiere outfit got lost and that she found her sparkly dress at KaDeWe, which is a huge department store like Harrods. When we talked about the movie, she said:

I liked it (the movie) and my father complained that it was very, very loud. […] He enjoyed it.

We actually saw an unfinished version a few weeks before the premiere, but it actually was quite different than  – not very, very different – but they had made some small changes by the time we saw it at the premiere. […] But it was great to see it. Very lovely movie.

The whole premiere was absolutely amazing and you can have a look at some photos from the red carpet and from the short presentation before the movie was shown:

Photos without watermarks all belong to Constantin Film.

Watch a recap of the European premiere here and check TMI Source to read our short interviews with Jamie, Martin Moszkowicz and Elyas M’Barek.

4 Comments on European premiere of THE MORTAL INSTRUMENTS: CITY OF BONES