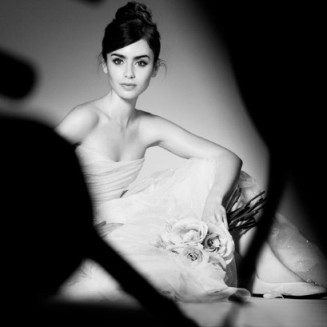 Lily’s co-star in Mirror, Mirror, Julia Roberts, as well as English actresses Emma Watson and Kate Winslet are also embassadors for the brand.

Lancôme have announced a new rose amongst their already blossoming English actress hall of fame.

“With her charm, gracefulness, modernity and lively wit, Lily Collins is the perfect embodiment of femininity according to Lancôme,” stated Françoise Lehmann, general manager of Lancôme International. And with her modelling experience (her career in front of the camera started when she was two) Collins is also a perfectly confident beauty muse for her tender age.

“It’s an absolute honour and privilege to have been chosen to represent the Maison Lancôme. I feel incredibly lucky to be included among the most inspirational women ambassadresses for one of the most prestigious brands in the world. It’s truly a dream come true,” confided Collins, whose beauty has been likened to a modern-day Audrey Hepburn.

Click here to read the rest of the article.

Elleuk.com added that Lily will be “the face of the spring collection out January 2014.”

.@LilyCollins will be the face of the #Spring #makeup collection #French Ballerine in Jan. 2014 #LilyforLancome

Congratulations, Lily and thank you British Nephilim for the tipp!

4 Comments on Lily Collins is the new face of Lancôme