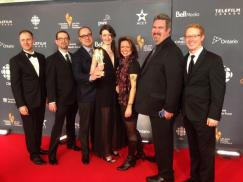 Action-adventure film The Mortal Instruments: City of Bones — based on bestselling young adult novel series by Cassandra Clare — was among the big winners during a non-televised gala this afternoon, when awards were presented in nearly two dozen categories.

Previously announced as the winner of the Golden Reel Award (the homegrown film with the biggest Canadian box office, after grossing more than $5.2 million in Canada), The Mortal Instruments received further kudos for its visual effects, make-up, overall sound and sound editing.(via CBC)

Congrats to everyone involved in the making of City of Bones!