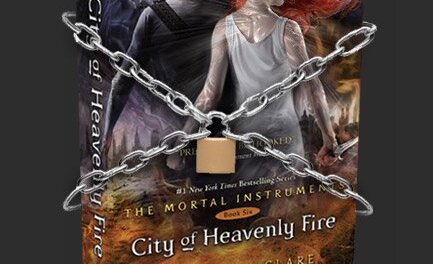 Over the last few weeks we had two exclusive excerpts from City of Heavenly Fire, a look at the artwork inside the cover and a video in which Cassandra shared three secrets.

Today’s TMI Tuesday exclusive content is another real treat! A few weeks ago it was revealed that Sophie Turner – Sansa Stark from Game of Thrones – and Jason Dohring – Logan Echolls from Veronica Mars – will read the City of Heavenly Fire audio book and now we have an excerpt read by Sophie.

or watch the video below:

What do you think of this final excerpt? Do you like Sophie and Jason’s voices and how are you preparing yourself for City of Heavenly Fire? Sound off in the comments.

Edit: Since the video isn’t availabe to everyone, here’s the written version of it. The punctuation and possible typos are by me. Please give credit to TMI Source if you use this excerpt:

Clary set her bag down by the door and looked around. She could hear her mother and Luke moving around her, putting down their own luggage, turning on the witchlights that illuminated Amatis’s house. Clary braced herself; they still had little idea how Amatis had been taken by Sebastian.

Though the place had already been examined by Council members for dangerous materials, Clary knew her brother. If the mood had taken him, he would have destroyed everything in the house, just to show that he could. Turned the sofas to kindling, shattered the glass and the mirrors, blown the windows to smithereens.

She heard her mother give a small exhale of relief, and knew Jocelyn must have been thinking what Clary was.
Whatever had happened, the house looked fine. There was nothing in it to indicate that harm had come to Amatis.

Books were stacked on the coffee table, the floors were dusty but uncluttered. The photographs on the walls were straight. Clary saw with a pang that there was a recent photograph near the fireplace of her, Luke and Jocelyn at Coney Island, arms around one another smiling.

She thought of the last time she had seen Luke’s sister, Sebastian forcing Amatis to drink from the Infernal Cup as she screamed in protest. The way the personality had faded out of her eyes after she had swallowed its contents.

Clary wondered if that was what it was like to watch someone die. Not that she hadn’t seen death, too. Valentine had died in front of her. Surely she was too young to have so many ghosts.

Luke had moved to look at the fireplace and the photos hanging around it. He reached out to touch one that showed two blue-eyed children. One of them, the younger boy, was drawing while his sister looked on, her expression fond.

Luke looked exhausted. Their Portal travel had taken them to the Gard and they had walked down through the city to Amatis’s house. Luke still winced often from the pain of the wound in his side that hadn’t quite healed, but Clary doubted the injury was what was affecting him.

The quiet in Amatis’s house, the homey rag rugs on the floor, the carefully arranged personal mementos; everything spoke of an ordinary life, interrupted in the most terrible way possible.

Jocelyn moved over to put her hand on Luke’s shoulder, murmuring soothingly. He turned in the circle of her arms, putting his head against her shoulder. It was more comforting than in any way romantic, but Clary still felt as if she had stumbled on a private moment.

Soundlessly, she plucked up her duffle bag and made her way up the stairs. The spare room hadn’t changed; small, the walls painted white, the windows like portholes, circular. There was the window Jace had crawled through one night and the same colorful quilt on the bed.

She dropped her bag onto the floor near the nightstand. The nightstand where Jace had left a letter in the morning, telling her he was going and he wasn’t coming back. She sat down on the edge of the bed, trying to shake off the web of memories. She hadn’t realized how hard it would be to be back in Idris. New York was home, normal. Idris was war and devastation. In Idris she had seen death for the first time.

14 Comments on TMI Tuesday: Listen to a ‘City of Heavenly Fire’ excerpt read by Sophie Turner