The end of the year is approaching so it’s time for the goodreads Choice Awards 2014!

Cassandra Clare’s City of Heavenly Fire – the final novel in her The Mortal Instruments series – as well as her middle grade book The Iron Trial, which she co-wrote with Holly Black, are nominated for Best Young Adult Fantasy & Science Fiction of 2014 and Best Middle Grade & Children’s of 2014 respectively. 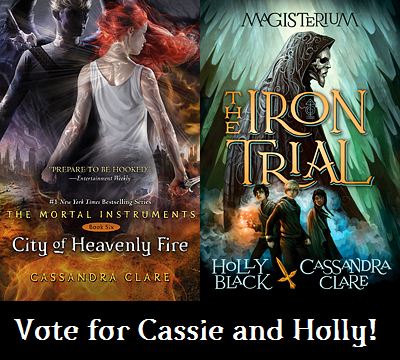 Cassie’s City of Lost Souls and Clockwork Princess came second in 2013 and 2014, they only lost against Veronica Roth’s Divergent series. City of Heavenly Fire and The Iron Trial are up against stiff competition, but we can do it this year!

Vote for City of Heavenly Fire.

Vote for The Iron Trial.