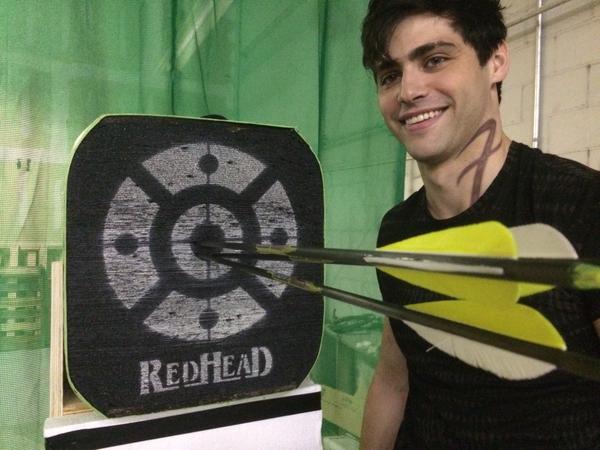 Today’s photos from the set of Shadowhunters were right on target.

Matthew Daddario worked on perfecting his Alec Lightwood-like archery skills, and from the photos it looks like he’s doing pretty good! (Bonus points for the Batman photo/video bomb)

Here’s the video that goes with it:

@MatthewDaddario exhibiting some serious swagger while learning from the best of the best tonight… The Batman! pic.twitter.com/IczGEi1fsa

And here’s the end result:

Today’s archery practice in the Stunt Rehearsal stage makes me smile as much as ‘Alec’. Great shots @MatthewDaddario pic.twitter.com/vO22bcwFDn

Also, it was a highly entertaining clash of fandoms involving Alan Van Sprang and Shadowhunters and Reign, back when he had another son named Sebastian, played by Torrance Coombs.

GIVE ME BACK MY FATHER, RED DEVIL. https://t.co/QO3lBaZlI2

Shadowhunters will premiere in early 2016 on ABC Family.