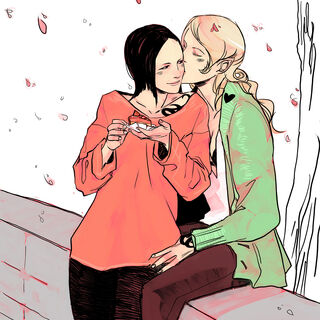 #Lovewins so Cassandra Clare took to her tumblr to celebrate with a snippet from one of her upcoming Tales from the Shadowhunter Academy.

I thought a snippet from Helen and Aline’s wedding in the TSFA story Bitter of Tongue might be appropriate!

Simon did not fully understand the traditions of the Shadowhunter people.

There was a lot in the Law about who you could and could not marry: if you married a mundane who did not Ascend, you got your Marks stripped and were out on your ear. You could marry a Downworlder in a mundane or a Downworlder ceremony, and you wouldn’t be out on your ear but everyone would be embarrassed, some people would act like your marriage did not count, and your terribly traditional Nephilim Great-Aunt Nerinda would start referring to you as the shame of the family. Plus with the Cold Peace functioning as it was, any Shadowhunter wanting to marry a faerie was probably out of luck.

But Helen Blackthorn was a Shadowhunter, by their own Law, no matter how many people might despise or distrust her for her faerie blood. And Shadowhunters had not actually built it into their precious Law that Shadowhunters could not marry someone of the same sex. Possibly this was just because it hadn’t occurred to anyone even as an option way back when.

So Helen and Aline actually could be married, in a full Shadowhunter ceremony, in the eyes of both their families and their world. Even if they were exiled again right afterward, they got this much.

In a Shadowhunter wedding, Simon had been told, you dressed in gold and placed the wedding rune over each other’s hearts. There was a tradition a little like giving away the bride, for both parties in a marriage. The bride or groom would each choose the most significant person to them from their family—sometimes a father, but sometimes a mother, or a parabatai or a sibling or chosen friend, or their own child or an elder who symbolized the whole family—and the chosen one, or suggenes, would give the bride or groom to their beloved, and welcome their beloved to their own family.

This was not always possible in Shadowhunter weddings, on account of sometimes your whole family and all your friends had been eaten by snake demons. You never knew with Shadowhunters. But Simon thought it was kind of beautiful that Jia Penhallow, Consul and most important member of the Clave, was standing as suggenes to give her daughter Aline to the tainted, scandalous Blackthorns, and to receive Helen into the bosom of her family.

Aline’d had some nerve suggesting it. Jia’d had some nerve agreeing to it. But Simon supposed that the Clave had already effectively exiled Jia’s daughter: what more could they do to her? And how better to politely spit in their eye than to say: this girl you spat on and sent away is now as good as the Consul’s daughter.

Julian was the one standing to give Helen away. He stood in his gold-inscribed clothes, his sister on his arm, and his sea-in-the-sunlight eyes shone as if he was happy as any kid could be. As though he had not a care in the world, though Simon knew better.

Helen and Aline were both dressed in golden gowns, golden thread glittering like starlight in Aline’s black hair. They were both so happy, their faces outshone their gowns. They stood at the centre of the ceremony, twin suns, and for a moment all the world seemed to spin and turn on them.

Helen and Aline drew the marriage runes over each others’ hearts with steady hands. When Aline drew Helen’s bright head down to her own for a kiss, there was applause all throughout the hall.

“Thank you for letting us come,” whispered Helen after the ceremony was over, embracing her new mother-in-law.

Jia Penhallow folded her daughter-in-law in her arms and said, in a voice considerably louder than a whisper: “I am sorry I must let you be sent away again.”

Simon did not tell Julian Blackthorn about meeting Mark, any more than he had told Mark that Helen was not there to care for the Blackthorn children. It seemed hideous cruelty, to load another burden on shoulders already burdened almost past bearing. It seemed better to lie, as faeries could not.

But when he came up to Helen and Aline to congratulate them, he stepped up and kissed Helen on the cheek, so he could whisper to her: “Your brother Mark sends you his love, and his happiness for your love.”

Helen stared at him, sudden tears in her eyes but her smile even more radiant than before.