SHADOWHUNTERS - “The Mortal Cup” - One young woman realizes how dark the city can really be when she learns the truth about her past in the series premiere of "Shadowhunters" on Tuesday, January 12th at 9:00 - 10:00 PM ET/PT. ABC Family is becoming Freeform in January 2016. Based on the bestselling young adult fantasy book series The Mortal Instruments by Cassandra Clare, "Shadowhunters" follows Clary Fray, who finds out on her birthday that she is not who she thinks she is but rather comes from a long line of Shadowhunters - human-angel hybrids who hunt down demons. Now thrown into the world of demon hunting after her mother is kidnapped, Clary must rely on the mysterious Jace and his fellow Shadowhunters Isabelle and Alec to navigate this new dark world. With her best friend Simon in tow, Clary must now live among faeries, warlocks, vampires and werewolves to find answers that could help her find her mother. Nothing is as it seems, including her close family friend Luke who knows more than he is letting on, as well as the enigmatic warlock Magnus Bane who could hold the key to unlocking Clary's past. (ABC Family/John Medland) ALBERTO ROSENDE, KATHERINE MCNAMARA, SHAILENE GARNETT 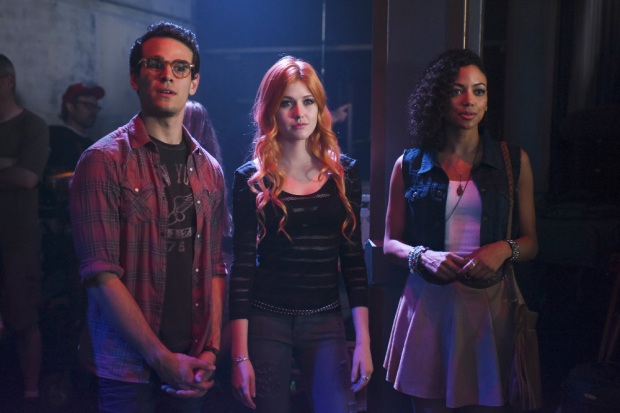 With one week until Shadowhunters premieres fans are eager to see more from the small screen adaptation of Cassandra Clare’s The Mortal Instruments.

ABC Family/Freeform has released three new sneak peeks from the Shadowhunters series premiere, which features two previously scene clips from outside and inside Pandemonium. But there’s also a new scene where Isabelle confronts Alec about his distaste of Clary, who has captured Jace’s eye.

2 Comments on ‘Shadowhunters’ 1×01: Three Sneak Peeks from ‘The Mortal Cup’