SHADOWHUNTERS - “The Descent Into Hell is Easy" - Clary’s memories may be the key to finding her mother and The Mortal Cup in “The Descent Into Hell is Easy,” an all-new episode of “Shadowhunters,” airing Tuesday, January 19th at 9:00 – 10:00 p.m., EST/PST on Freeform, the new name for ABC Family. ABC Family is becoming Freeform on January 12, 2016. (ABC Family/John Medland) DOMINIC SHERWOOD, KATHERINE MCNAMARA

What do you do when you’re thrust into a world that’s always been a part of you but that you’re just now discovering and are now at the center of? When everything seemingly is falling apart in front of you, and you’re trying to stay strong in the midst of it all? That’s the situation Clary Fray finds herself in with Shadowhunters’ second episode.

In “The Descent Into Hell Is Easy,” Clary, Jace, Simon, Isabelle, and Alec must journey to the City of Bones in order to retrieve Clary’s lost memories. The hour begins right where we left off from the pilot with Clary being torn between running away from this newfound Shadowhunter life with Simon or embracing her destiny by following Jace. Of course she chooses to follow Jace or else this would be a short story and an even shorter television show.

In the instance when we enter the Institute, the audience is essentially Simon in that we are being exposed to this new world. Jace helps peel back the glamour on the Institute and we see the Institute come to life complete with that ridiculous overabundance of technology. No matter how long we’re exposed to the Shadowhunters as tech savvy warriors it’s never going to feel organic and that’s because of the race’s backstory. The Shadowhunters have existed long before technology and what they do is possible because of their angelic origin. The overwhelming reliance on technology to do their work negates the need of their magic in the first place. It sort of feels like the Shadowhunters are some demon division of the FBI. And that’s not a compliment. Simon even makes a reference about them seemingly have “robbed a tech store.” See, Simon is us.

Then we get to the introductions as the Lightwoods meet Simon. Alec is just as fond as Simon as he is Clary, though Isabelle seems to have taken an interest in Simon. Simon is smitten, just as he is in the books, so much that he agrees to be the experiment in trying Isabelle’s cooking, which Jace warns him “don’t eat the food,” which was a nice callback to the books when we learn Izzy’s cooking is atrocious. 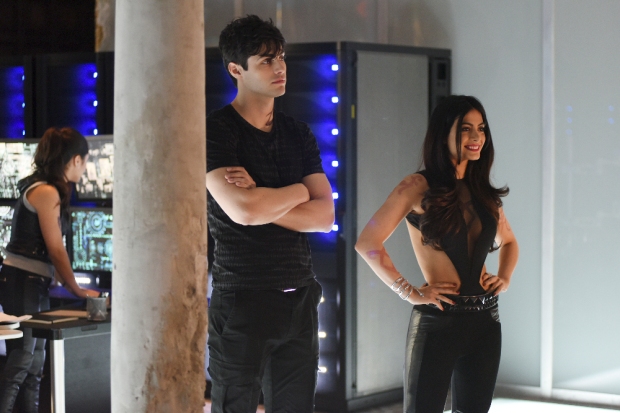 Jace takes Clary to meet Hodge Starkweather, who is their weapons trainer and former Circle member. “Jocelyn?” he asks Clary when he sees her. Clearly he knew Jocelyn. In fact, they were close friends in the Circle together. Clary gets some backstory on this Valentine and the Mortal Cup learning that it’s the most important instrument in the Shadow World (no mention that it’s a Mortal Instrument sadly) in which it can create new Shadowhunters and be used to control demons, which explains why Valentine wants it. So basically the entire conversation translates to this: Valentine can’t get the Cup. So we need to get to it first.

Eventually Clary and Jace learn that the best place to start in search of the Cup is Dot, who may or may not be in league with Valentine. But she’s the best place to start being as though she is a warlock and might have some idea of what happened to Clary and possibly Jocelyn. It takes a little convincing to get Alec to agree, but he finally relents and they set off in search of the warlock.

Meanwhile, Dot is determined to protect Clary from Valentine and goes to Magnus for help. Turns out that Valentine found out that a warlock created that potion that Jocelyn drank and he’s trying to hunt them down; he’s hunting down all warlocks so he’s fleeing. Magnus is running away. Sigh. This leaves Dot on her own, which certainly doesn’t bode well as she’s kidnapped by Valentine’s men and dragged back to Chernobyl (sorry, still don’t get it).

While this is happening Clary learns that the necklace her mother gave her acts as some kind of clairvoyant power where she can see her mom and Dot. The necklace leads them to Pandemonium, but they’re too late. Dot has been taken. So what are some desperate Shadowhunters and a mundane to do? “There is something we could do,” Jace says.

Time to head to the City of Bones for a visit with the Silent Brothers.

When they arrive on the outskirts of the City of Bones, Jace, Alec, and Isabelle go ahead to check things out. Alec warns Jace that if anything happens to “that girl” that it’s on them. He knows that, but he also knows what it feels like to have lost everything. That is until the Lightwoods took him in. “Your family always used to welcome strays,” Jace says. “You were never a stray,” Alec says, and it’s official I’ve been hit with feels for the first time in this show.

Since Simon can’t enter the City of Bones without dying (“By all means,” Alec chimes), Jace goes with Clary while Alec and Isabelle watch Simon on the outskirts. The two journey down to the bone city with Jace’s witchlight (which is much “cooler than a flashlight”) both seemingly freaked out a bit at this place. But they soon come face-to-face with a statue of the angel Raziel, which includes the Mortal Sword and the inscription: “Nephilim Facilis Descensus Averni,” which Jace translates to “Looking better in black than the widows of our enemies since 1234,” but it actually means, “For Shadowhunters, the descent into hell is easy.” It was one of the most faithful scenes adapted for the show so far, and it was wonderful. More please.

Meanwhile, outside Alec is so done with Simon (“Literally never stops talking.”), but Isabelle seems interested when Simon begins talking about his band and wants to hear some of his indie rock music (how is it that Jace doesn’t know what a G.I. Joe is but Isabelle knows about indie rock?) Simon has some songs on his phone which is back in the van. Isabelle suggests they go get it, and she gets an accusing look from Alec to which she responds, “He passes the time.” (Really? Did she just say that?) At the van, Simon is looking for music when Isabelle hears a noise outside and goes to see what it is. She instructs Simon to not leave the van while she does, which turns out to be bad advice as he’s taken by someone hiding in the backseat.

Back in the City of Bones, Clary takes her spot beneath the Mortal Sword and prepares for the memory-extracting process. And damn it’s terrifying as the tip of the sword pierces her forehead and we’re thrown back to a memory from two years prior. We see Clary pretending to sleep as Jocelyn and Luke discuss Jocelyn’s decision in taking Clary’s memories. Jocelyn says she’s keeping her safe because people can’t find out who Clary is; that she’s Valentine’s daughter.

The shock of the memory thrusts Clary back to reality as she struggles to accept the revelation that was just revealed: She’s Valentine’s daughter. When Clary and Jace exit the bone city Alec awaits them and Jace reveals the shocking news about Clary, which prompts Alec to have even more distrust in Clary than before. How do they know she’s not some sort of spy? Clary unloads on him for that accusation as she essentially sees her world falling apart. When Isabelle returns without Simon, that’s the final straw.

Clary runs back to the van screaming Simon’s name, praying that her best friend isn’t the next person she loses. “Is that the mundane’s name?” Our gang looks up to see two vampires – one of them Raphael – holding Simon upside down a hundred feet in the air clearly threatening his life. Jace threatens to kill Raphael, but Alec says that would violate the Accords. Only it wouldn’t. These vampires are clearly threatening a mundane’s life, which means that they should attempt to stop them. One of the problems that I have with this is that the show claims to be following the mythology but it’s not following through with it. Don’t claim to be following the ancient mythology if you don’t understand it.

Turns out the vampires want the Mortal Cup, as well, because that who controls it controls all. So they’re going to use Simon as leverage. Cue cliffhanger that sets up Hotel Dumort for next week; for the third episode; which seems really early this quick into the show; but then again a lot of things have seemed rushed so far.

Here’s a look at the good (raves) and the bad (rants) of “The Descent Into Hell Is Easy”:

22 Comments on ‘Shadowhunters’ 1×02 Recap: ‘The Descent Into Hell Is Easy’