Due to time restraints Cassandra Clare wasn’t able to go on US or UK tour for the release of Lord of Shadows, but she still managed to have a few events/signings here and there. This past week, Cassie was in the UK for two events, one in London on the 17th and one in Edinburgh on the 19th. The London event, titled “An Evening of Magic, Morality, Mythology, and More with Cassandra Clare and Holly Black”, was at St. James’s Church Piccadilly which some fans might remember from another Cassie Clare event back in July 2013.

I flew over to London to see Cassie and Holly, to get my books signed, to meet the friends that I’ve made because of Cassie’s books and to live-tweet for TMI Source’s readers. Sit back and enjoy our official recap of Thursday’s event!

The talk was supposed to start at 7 pm, but I went to the church at 3 pm to check whether some fans had already arrived. And indeed, I meet Amanda and Nicola who were the firsts in line.

Thanks to working with Simon & Schuster UK in the past, I managed to get a reserved seat and had a awesome view.

Just like last year, the event was moderated by literary journalist Anna James.

Time to kick off the talk!

Here they are!
They just arrived from Italy and have almost finished Magisterium #5. pic.twitter.com/3d0GqPLRK5

Cassie: “I was working on two proposals for new projects and Queen of Air and Darkness.”
Holly was editing Wicked King, the sequel to The Cruel Prince (out on January 2, 2018).
They also spent a lot time eating pasta and cheese.

Anna then asked about Magisterium #4, The Silver Mask, which is coming out on October 10.

Holly still gets angry tweets from fans because of the death in Magisterium 3.

Call is going to be in jail at the beginning of The Silver Mask but someone will break him out. 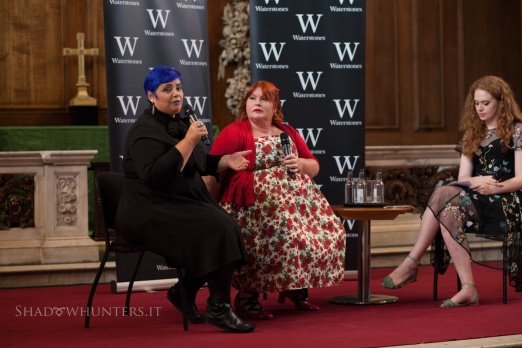 Who had the idea to write books together?

Cassie and Holly talk about how they decided to write a middle grade book. It involves Percy Jackson by @camphalfblood!

Cassie and Holly were on tour together and were sitting in their small local airport. Holly was asleep because she hadn’t had any coffee yet and Cassie was reading Percy Jackson. Cassie really loved the adventures in the book so she said she’d like to write a middle grade book, but wasn’t sure whether she had a middle grade writing voice. A soon as Holly had had coffee and was awake, she suggested that they’d write a book together. Once they were on the plane they plotted out the whole Magisterium series.

Favorite and hardest thing of writing books together?

The favorite thing about writing together bouncing off, sharing the same world, joking around.

Holly: The hardest thing is working around Cassie's schedule.

They live 5 miles apart but write Magisterium while on a writing retreat (like the one in Italy).

Holly basically has to chase Cassie to remote locations to write the Magisterium books. 🙂 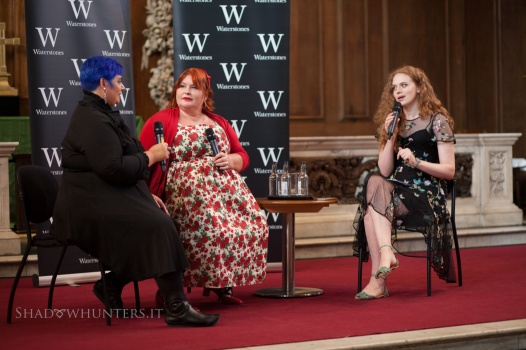 What can the fans expect from Lord of Shadows?

Cassie kind of recaps Lord of Shadows without any spoilers. 😊

It was very impressive!

Cassie: Lord of Shadows has taken us to a very dark place…

Queen of Air and Darkness will show us how certain people are affected by a big loss, what their next steps are going to be.

LoS was very influenced by politics in the US when Cassie wrote it.

Cassie realised that something was missing from the first draft and then she invented ZD to show them as the mouthpiece of the Cohort.

“We [writers] always pick up what’s in the atmosphere around us and there [during the US election] was this atmosphere of paranoia and anger and xenophobia and all of that reflects itself in the Cohort.”

Fiction can be escapism.
(More on that in our recap on https://t.co/1N5v4yBPAD) pic.twitter.com/sG678tBOQV

Holly talks about her new book, out January 2018, which is set in Faerie.
The Cruel Prince is dedicated to Cassie.

Fans at the event got an exclusive chapter sampler and Holly’s dedication to Cassie is really funny although Cassie thought that it was “in the spirit of mocking. For years the faeries were always part of the Downworlders in the Shadowhunter world and I always complained to Holly when I had to write about faeries because even though I love faeries and knew they were an integral part of the world, the way they talk drove me nuts. It’s so formal and you have to be very careful because they don’t lie [Holly laughed gleefully]. I used to make fun of the faeries all the time and the characters of the books would sit around making fun of the faeries […] and as I came up with The Dark Artifces and realised that it was gonna have a looot of faeries, I was like ‘Oh no’. And Holly was like ‘Haha’.”

Do Cassie and Holly discuss their projects with each other?

Cassie asks Holly for advice on characters (like Julian; Would he do this?). 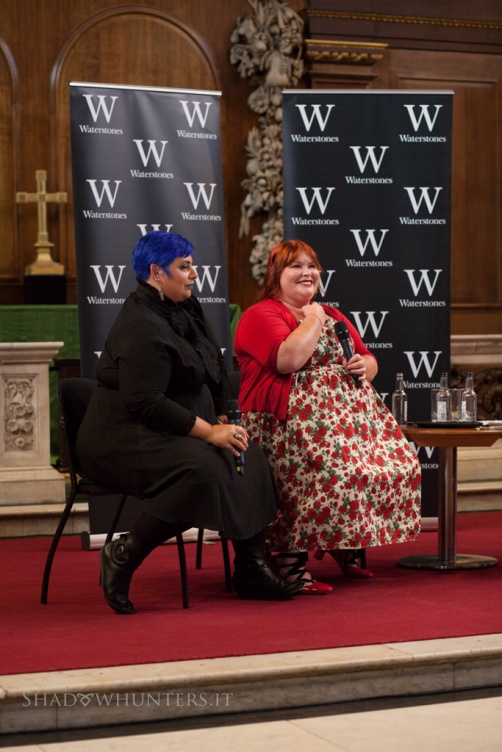 Anna: “Do you have similar styles of writing, the way you sit down and plan?

Cassie's favorite character from Holly's books is Jude (from The Cruel Prince).
Holly's favorite is Mark. She loves him!

Jude is “the hero. She’s badass, she’s mean, I like her. She’s ambitious and she doesn’t take crap from anybody. So I like Jude and you will also like her.”
Holly gushed about Mark: “He’s my new favorite. I can’t resist him. He’s a faerie. He’s funny, he’s so great! He’s so sad, he’s everything I like!”

Holly’s fangirling was the best 🙂

Anna: “One thing you could say about each other’s new book?”

Holly: You're so not ready for Queen of Air and Darkness!!!

Holly: “Oh, you are not ready for Queen of Air and Darkness. I don’t even know how to describe what happens. Everything that you think you know, what could happen, you are so WRONG! [Seriously, you should have seen Holly. She had so much fun telling us about Queen of Air and Darkness] There is something that happens yeah. … But you’re gonna be so happy. So so happy! I know it’s useless but OH MY GOD! I know this isn’t helpful but NO REALLY!”
Holly laughed and made everyone else laugh because she was just so passionate about the book.

Cassie about Cruel Prince: “I think it is Holly’s sexiest book and it’s not sexy in a Fifty Shades of Grey way. Everyone is imbued with sensuality. You will want to ship really bad and you’re gonna ship it and you might get it. And when you get it, you’re gonna be like ‘Ah, that was really wrong!'”

Cassie: There is a great ship in Holly's new book!

“How do you create your characters?”

“In which character did you put most of yourself in and how do you feel about that character now?”

Simon, Tessa and Dru are most like Cassie.
A lot is from Cassie's personal experience.

Time for the signing. 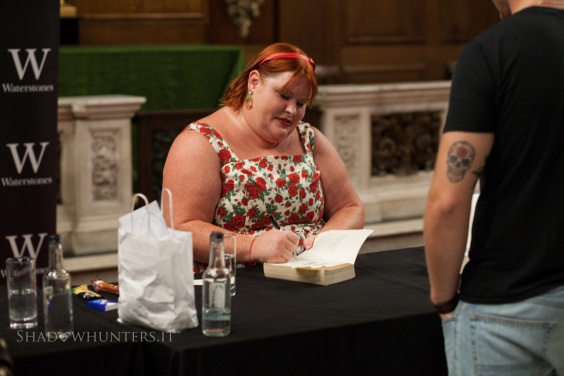 Fans waiting to get their books signed. pic.twitter.com/dHfIU7tCf7

So many fans leave with big smiles on their faces.
I absolutely love how books connect so many different people 😍💖

Photo #4 The last fans who got their books signed. 2 fans came from Cornwall!@cassieclare finished before Holly & she was really pleased 😊 pic.twitter.com/8aOjZnCvvx

I once again had a fantastic time in London and I am already looking forward to my next visit.

Thank you so much to Cassie, Holly and Josh for a memorable day, thank you, Simon & Schuster UK as well as Waterstones Piccadilly and thank you to Georgia Lawe. Until next time! ♥

Special thanks to your friends from Shadowhunters.it for letting us use some of their beautiful photos.