Subscribers of Cassandra Clare’s newsletter received a new issue yesterday and it included two things which we are going to share with you today. The first is a new snippet from Queen of Air and Darkness and then there’s the cover of A Deeper Love, the Ghosts of the Shadow Market short story that’s going to be released in August.
But first, the snippet! By the Angel, my immediate reaction to it was a loud ‘Oh shit’ because it could change everything for two characters:

It had only been a few days since Robert Lightwood’s death, but Horace Dearborn had already completely redecorated his office.

The first thing Emma noticed was missing was the tapestry of the Battle of the Burren. The fireplace was lit now, and over it Alec Lightwood’s image had been replaced by Zara Dearborn’s. It was a portrait of her in gear, her long blond-brown hair falling to her waist in two braids like a Viking’s. ZARA DEARBORN, CLAVE HERO, said a gold plaque on the frame.

“Subtle,” Julian muttered. He and Emma had just come into Horace’s office; the Inquisitor was poking around in his desk, seemingly ignoring them. The desk at least was the same, though a large sign hung behind it that announced: PURITY IS STRENGTH. STRENGTH IS VICTORY. THEREFORE PURITY IS VICTORY.

Dearborn straightened up.  “‘Clave hero’ might be a bit simple,” he said thoughtfully, making it quite clear he’d heard Julian’s comment. “I was thinking ‘Modern Boadicea.’ In case you don’t know who she was —“

“I know who Boadicea was,” said Julian, seating himself; Emma followed. The chairs were new as well, with stiff upholstery. “A warrior queen of Britain.”

“Ah, yes, so Zara told me.” Horace dropped heavily into his own seat, behind the mahagony desk. He was a big man, rawboned, with a nondescript face. Only his size was unusual — his hands were enormous, and his big shoulders pulled at the material of his uniform. They must not have had time to make one up for him yet. “Now, children. I must say I’m surprised at you two. There has always been such a… vibrant partnership between the Blackthorn and Carstairs families and the Clave.”

“The Clave has changed,” said Emma.

“Not all change is for the worse,” said Horace. “This has been a long time coming.”

Julian swung his feet up, planting his boots on Horace’s desk. Emma blinked. Julian had always been rebellious at heart, but rarely openly. He smiled like an angel and said, “Why don’t you just tell us what you want?”

Horace’s eyes glinted. There was anger in them, but his voice was smooth when he spoke. “You two have really fucked up,” he said. “More than you know.”

Emma was jolted. Shadowhunter adults, especially those in positions of authority, rarely swore in front of anyone they considered children.

He opened a desk drawer and took out a black leather notebook. “Robert Lightwood’s notes,” he said.

I really do not have words for how scared I am after this shocking reveal. What are Emma and Julian are going to do now? What is going to happen to them? So many questions and they won’t be answered until December 4!

Let’s move on to more cheerful things like the A Deeper Love cover reveal (out on August 14): 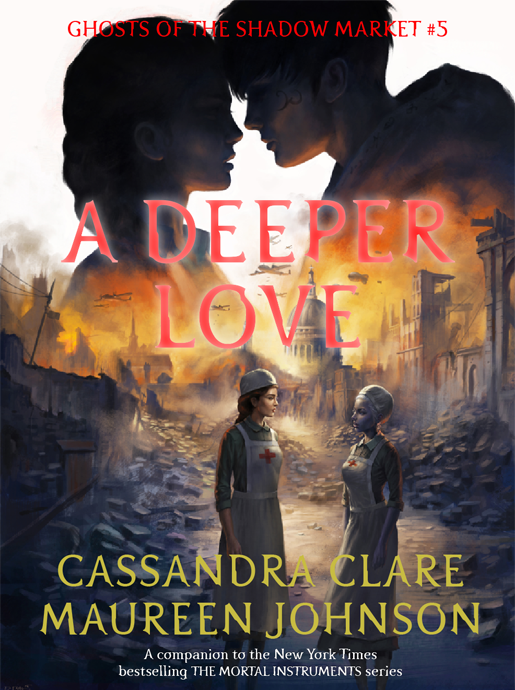 It is only three years since Tessa Gray lost her beloved husband William Herondale, and she is searching for a reason to live, trying to find the path of being a warlock with the guidance of her friend Catarina Loss. World War II rains down destruction on their world, and Tessa and Catarina become nurses who make bargains at the Shadow Market for enchantments to help suffering mundanes. But can Brother Zachariah bear to see the woman he loves risk her life, or might he consider breaking sacred vows to save her from loneliness?

Okay, maybe I was wrong about the cheerfulness, this also sounds really sad! But what’s new? We’re talking about Cassie Clare after all 😉

What do you think of the new snippet and how do you like the cover? Sound off in the comments below.