It’s the end of August which means two things: 1) Queen of Air and Darkness is published in about three months and 2) Cassandra Clare sent out another newsletter with a new snippet, a photo of her cat Reginald and other fun stuff.

The snippet is a pretty interesting one – it looks like some Shadowhunters created an army to fight the Cohort:

“If we’re an army, what are we called?” said Simon.
Julian turned and unpinned the rolled-up canvas hanging on the wall behind him, which had been held in place with tacks. A gasp went up as it unfurled.
Julian had painted a banner, the kind an army would carry before it in wartime. The central item was a saber, point down, painted a shimmering pale gold. Behind the saber spread a pair of angel’s wings, while on each side clustered symbols of Downworld—a star for vampires, a spell book for warlocks, a moon for werewolves, and a four-leafed clover for faeries.
Dangling from the hilt of the saber, so small many would not be able to see it, was a locket with a circle of thorns on the front.
“We are called Livia’s Watch,” Julian said, and Emma saw Ty sit up straighter in his chair. “We carry this banner in honor of my sister, so that all who have been hurt by the Cohort will not be forgotten.”

In addition to this snippet, we also have artwork by Kathleen Jennings so that we can see what the banner for Livia’s Watch looks like. 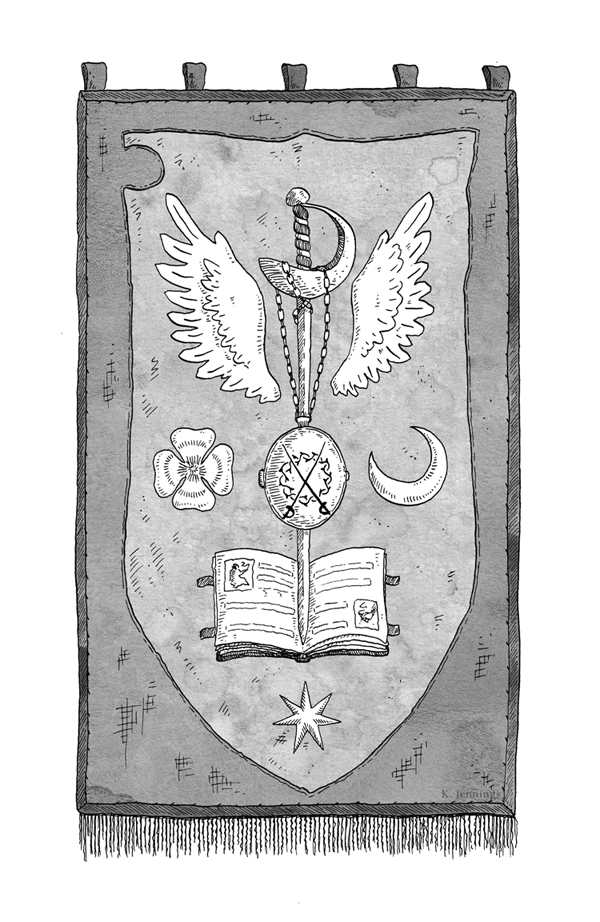 I love this and I cannot wait to see Kathleen’s art in the book!

What do you think of the snippet and the art? Sound off in the comments below.

Queen of Air and Darkness is published on December 4.