Happy April and happy spring (or autumn)! It’s been quiet for the past two months but today we’re back with a bang! 😀
Cassandra Clare sent a very special issue of her newsletter yesterday and for once it’s not Shadowhunters books related. Cassie is currently writing her first adult novel – a fantasy duology – and she has now shared loads of new and interesting information. Are you ready to find out more about Kellian, Lin, the world of Sword Catcher, see art and read another snippet?

There are so many fascinating and beautiful countries in Dannemore, but those who live in Castellane know that it is the jewel at the heart of everything. Barely even a country, a city-state built atop saltwater lagoons, with ocean on one side and high mountains on the other three. But from this inhospitable soil has grown a city of massive wealth, power, and beauty, the center of trade for the whole continent. Its ships crowd the seas, bringing everything from spices and dyes to timber and jewels. And its streets are crowded with people from all over the globe, bringing their food, their art, their culture to add to the mix of this truly international city.

But in truth, there are two Castellanes. Atop the Hill live Castellane’s wealthy families: lords and merchants whose fleets have brought them money and influence, whose trade charters are fought and sometimes murdered over, and who scramble and wrestle for influence under the watchful eye of the royal family. And below them, everyone else, who make their way in the world under the watchful eye of the city’s other monarch: the master of criminals, the Ragpicker King.

The King on the Hill, and the King in the City. Between these two the whole city of Castellane is balanced.

The historical research that led to Castellane’s creation, and the other countries whose people we’ll meet in the book, was a huge amount of fun for me. I’m really looking forward to showing you its neighborhoods and its sites.

Kel is just another street kid with no parents, at the bottom of the city’s social order, a nobody with no prospects. But at age eight he is plucked from the depths of city and brought to the palace, where he is introduced to the crown prince, a boy his age called Conor. His new role is explained to him: he will live with Conor. He will grow up with him. He will learn what Conor learns. And he will learn how to be Conor. To walk like him, talk like him, gesture like him. Because Kel has been chosen as the prince’s double, who will stand in for him in case of danger. He will be the prince’s Sword Catcher.

Now he and Conor are young men, and something both more and less than brothers. Conor depends on Kel, and loves him, but often takes him for granted—but then Conor takes everything about his power and his wealth for granted. And for his part, Kel loves Conor, and feels honored by his role.

But then things start to go a bit strange, and Kel will find himself pulled back to the lower city, and trying to figure out how to live in both worlds—and, independent of Conor, who he is.

Once upon a time, there was magic in Dannemore. Great Sorcerer-Kings ruled, and reshaped the land with their very thoughts. But one Sorcerer Queen mourned the destruction that their wars wrought, the innocent lives lost. She betrayed the Sorcerer-Kings and brought about the Sundering, wiping magic from the world. But in so doing, her own land, Aram, was destroyed, and its people, the Ashkar, made homeless.

To the rest of the world, this Goddess is the great betrayer, who destroyed their power. To the Ashkar, she is the one who is promised, the one who will come back to them someday, and restore Aram. Until then they wander, living all over Dannemore but at home nowhere. In most cities they are second-class citizens, shut away in walled neighborhoods and subject to curfews and other restrictions.

But Dannemore needs the Ashkar, for two reasons. First, they are well-known as the greatest of doctors and medics, using the knowledge they’ve carried with them—the only wealth they possess—to heal the body. And second, they are still able to do a bit of magic.

Nothing like the magic of the old days, of course. They can weave tiny spells—protections, illusions—based on combining letters and numbers in the ancient magical system of gematry, and instill them in amulets.

Lin Caster is Ashkar, and although still quite young, almost certainly the most talented of Castellane’s doctors. Which is a bit of a problem for the old men who preside over the Sault, the walled Ashkar neighborhood, because women are not supposed to become doctors. Doing so has required Lin to push against resistance from all directions, and even as she has earned grudging respect for her work, she is also considered a bit peculiar, and more than a bit of a troublemaker.

But that’s Lin: she sees a problem, she goes at it until she finds a way through, no matter how intimidating it might be. That’s always worked for her. But now her closest friend Maryam, one of her only true friends in the world, is dying, and no matter how frantically Lin searches for treatments, no matter how great her skill and her insight, there seems to be nothing she can do.

Of course, there is the old magic. There are still books about it out there. Some of them surely in Castellane, where almost everything in the world eventually turns up. They are forbidden, of course. But it could be just that forbidden magic that saves the day when she is summoned to the Palace to heal the injured Crown Prince . . .

Sword Catcher and Me!

Like all my books, I was inspired by many different things in writing this book, and look forward to talking about them in future newsletters! I did a bunch of reading about actual doubles of political leaders, a practice which has continued into the modern day, although nowadays it’s mostly used by totalitarian dictators rather than kings. There are harrowing articles about the people chosen for this role, given plastic surgery and dental work, their lives before eradicated from existence. (Luckily for Kel, an Ashkar amulet is sufficient in Castellane.) I also got to look into the kind of merchant city-states that Castellane is based on, like the Republic of Venice, the most famous historical source of backstabbing merchant nobles. I’ve always wanted to write vicious court intrigue, and there is no shortage of it on the Hill.

Also deeply interwoven with Sword Catcher is Jewish myth and folklore, my own cultural heritage. I’ve always loved Jewish-inspired fantasy stories, and am really excited to put my own spin on this rich mythos and the stories I grew up with.

But while I’ve had a lot of fun with the setting, of course what I really want to talk about is the characters—so many more than Lin and Kel. I haven’t even said much yet about Prince Conor Aurelian, a thoroughly infuriating prince, or Lin’s mysterious grandfather, the advisor to the King, Mayesh Bensimon. Or Jie-An, the Ragpicker King’s right-hand assassin, with her own dark secrets. Or Merren Asper, part-time student, full-time poisoner, and hopeless romantic.

But we’ll have lots of time for that in future newsletters. For now, I hope this gives you a little bit of a sense of Sword Catcher and I look forward to digging into all its aspects with you in the months to come! Let me leave you with some art by Novarentale: here’s Kel, looking out over the harbor of Castellane! 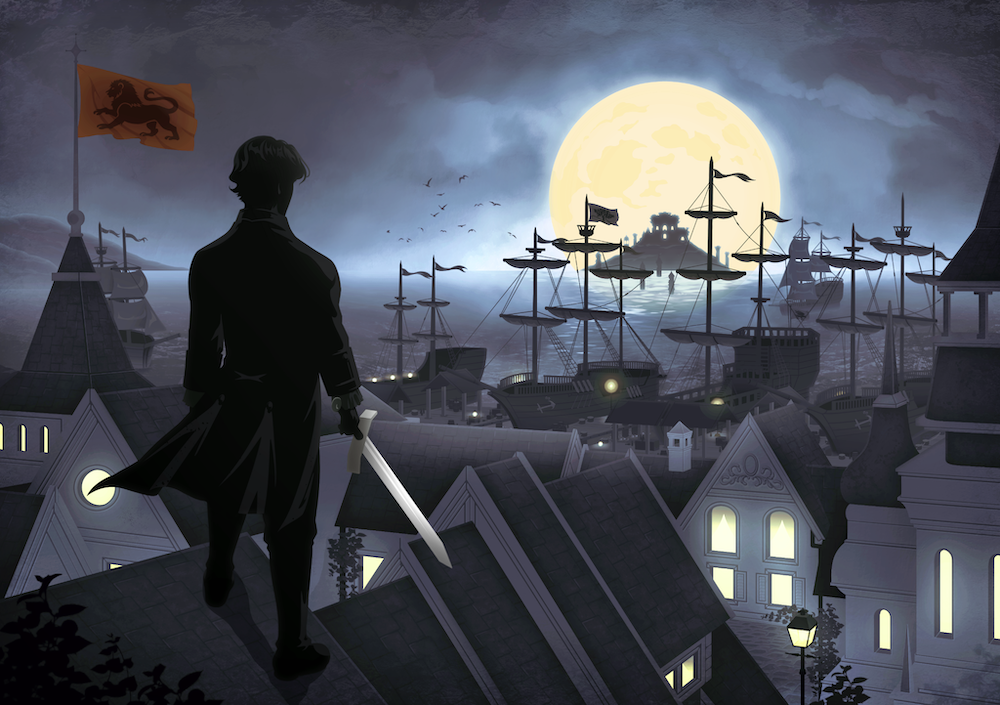 Prince Conor sounded exhausted. Pain was exhausting, Lin knew; it wore out the soul as well as the body. But there was something else in his voice. A weariness that spoke to a death of expectation. If he had wanted more than a marriage brought about by blackmail, he would not now have it.

“Ten thousand crowns,” he said, almost drowsily. “The cost of a prince, it turns out. I realize I have been a fool; you need not tell me. I ought to have gone to Bensimon. Asked his advice. Told him the truth.”

Lin placed the last talisman on his back. “I will not tell you that you have made good decisions,” she said. “Clearly, that is not the case.”

Wow! I love this introduction to Cassie’s new fictional world! I am particularly interested in Lin and the whole magical aspect.
From past interviews, etc. that I’ve read, listened to or done myself, I know how much effort and care Cassie is putting into these novels so I am incredibly excited to read this duology. ❤
Right now it looks like we are going to have a fall 2023 release date for Sword Catcher and we’ll see about book two, The Ragpicker King.
You can click this link for more Sword Catcher news.

What do you think guys? Are you ready for a completely new world? Sound off in the comments below!

3 Comments on Welcome to the world of ‘Sword Catcher’ ⚔️