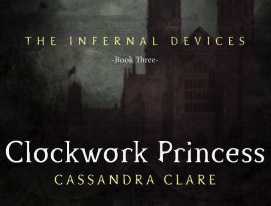 While fans are clamoring for Clockwork Princess, the third installment of the bestselling The Infernal Devices, there is a bittersweet feeling as it will be the final installment.

Clare wouldn’t say whether or not the prologue will talk about Tessa’s life in the past 100 years.

That would take us from the 19th century into the 21st century and the world of The Mortal Instruments, which takes place between 2006-2007. Tessa made an appearance in the City of Glass epilogue, where she talked with Magnus.

Clockwork Princess will be released on March 19, 2013.

What are your thoughts? What do you think we could learn in the epilogue? Could Tessa make an appearance in City of Heavenly Fire? Sound off in the comments!