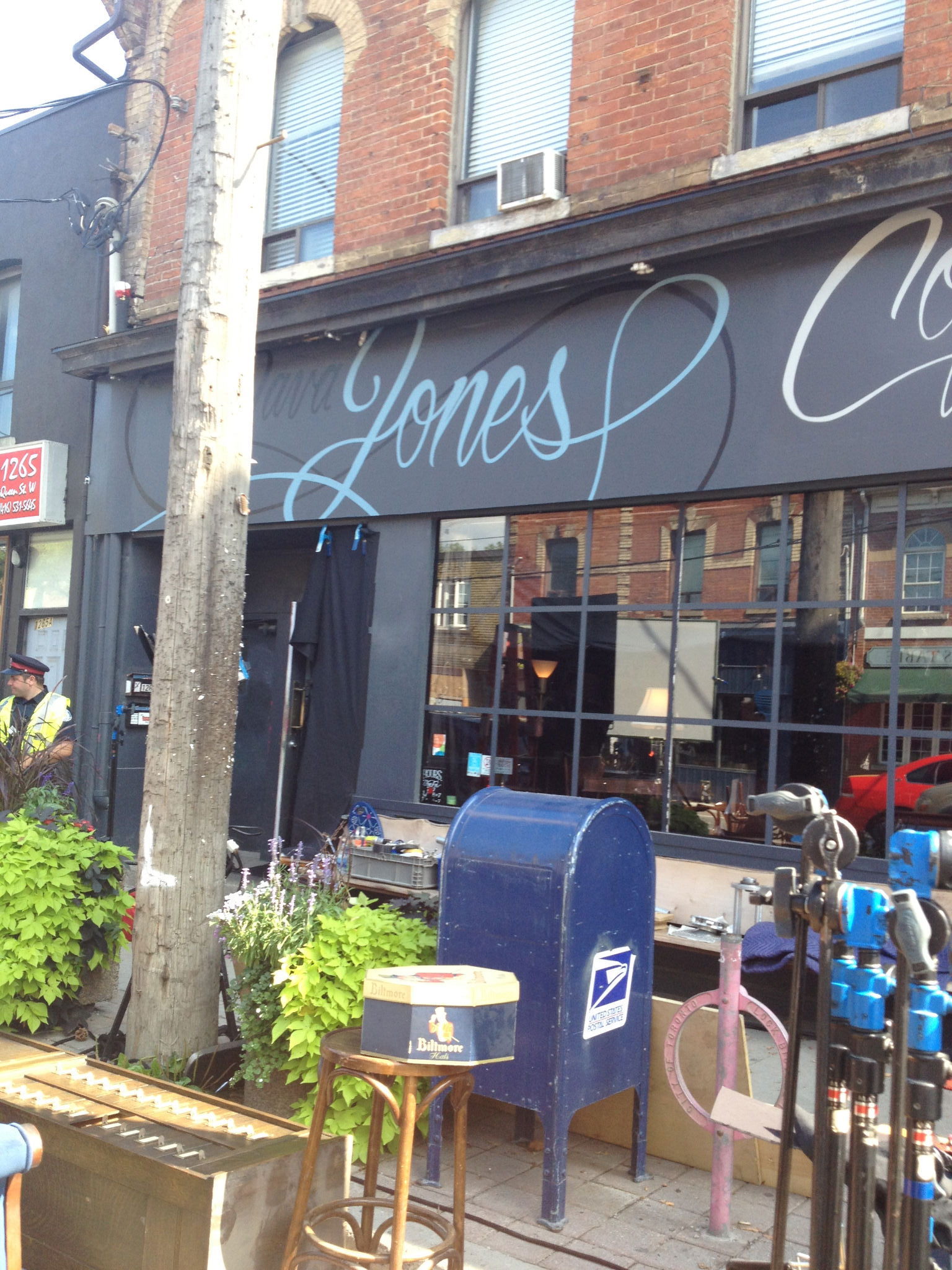 Filming on the highly-anticipated adaptation of THE MORTAL INSTRUMENTS: CITY OF BONES continued on Wednesday in Toronto. One of our Toronto lookouts, Sam (@Sam_Watson3), made the trip out to the set, where she watched filming of the Java Jones scene and met Lily Collins and Robert Sheehan. Check out her full report:

The whole way down to Toronto (I live about 45 min away) my mom was laughing at me because I was so excited and nervous so I was just sitting there smiling like an idiot, lol. So I arrived on the set around 1pm, and there was already a group of girls there. I was a bit flustered when I was walking by the set because I was so overwhelmed, so I didn’t even notice that there was either Lily or her stunt double standing literally two feet away on the street, but I’m pretty sure it was her stunt double. Robbie was hanging around a black tent, the change room/makeup/hair one from my guess, and he seemed really relaxed. He waved a few times and everyone would giggle and wave back when he did, lol. After a while, he came and signed autographs! I got my book signed, yayy! People were asking questions and he was answering and laughing, I was near the back so I didn’t quite hear everything, unfortunately.  Jamie and Lily were in the café while this was going on, but I don’t think they were filming, just practicing and such probably since we were allowed to talk.

Later, Lily and Jamie came out but Jamie was of course hiding 😦 they stayed there for a bit but then they headed back to the café and Jamie wasn’t wearing his jacket, finally! I got a picture of some runes on his arms! Then they went back in the café, but Lily wasn’t wearing her jean jacket, so she was in a white tee and a plaid vest on, jeans and her hair down. Robert was wearing jeans and a black t-shirt. And of course, Jamie was in all black. They filmed for a bit and when they came back around to the tent, Lily was in her coat again, but not for long because they did a costume change! And Robert of course has to be a tease and change his shirt right where we can see him! But he was so quick that none of us had enough time to get a picture! So he ends up wearing a red t-shirt with a plaid long sleeve and Lily wears jeans again with a loose striped t-shirt and her hair done up. But we were all sad because Jamie left in a van. He was still desperate to stay hidden by the looks of it; he sat all the way in the back, with his hood on and slouching down. So they start filming again, there’s some extras that were going in and out of the café and such. Then a trailer which looks like one for an actor pulls up and parks right on Queen St. They moved all the NYC taxis for it. I was keeping my eye on it but I didn’t see anyone go in or out and it didn’t have a name on it.

After some more filming, Robbie and Lily come out. Robert is right at the edge of the sidewalk and one of the workers pulls up his shirt to take his mic I believe because right after, everyone went on break for about an hour and a half. I walked down Gwynne Ave and there were 4 large rental trucks with some equipment in them. I’m not sure, I’m hoping someone can confirm this, but the subdivision kind of looked like the one where they were filming Clary’s house, was this the spot? If you know, please share! J I got back about an hour after the break started and nothing went on for a bit. Then they filmed more Clary/Simon scenes. Then Robert, being the sweetheart he is, comes back and signs more autographs! I asked the lady who was with him (who I’m told is a publicist) if Lily was going to be signing autographs, and she said no because she signed a lot the day before. But what do you know, not even ten minutes later, Lily comes over! She was so nice! She was asking everyone their names and even got to sign an amazing portrait some drew of her! She was amazed by it.

And that’s where my day ended sadly. I had a long trip back but the 3 blisters and 2 sore feet later, it was all worth it. I’m hoping to return another day to fill up my page with autographs!

Thanks to Sam for sharing her CITY OF BONES set experience with us! Sounds like she had a fantastic time!

Check out her photos from the set visit:

3 Comments on TMI Set Day 3: Sam’s report from the CITY OF BONES set