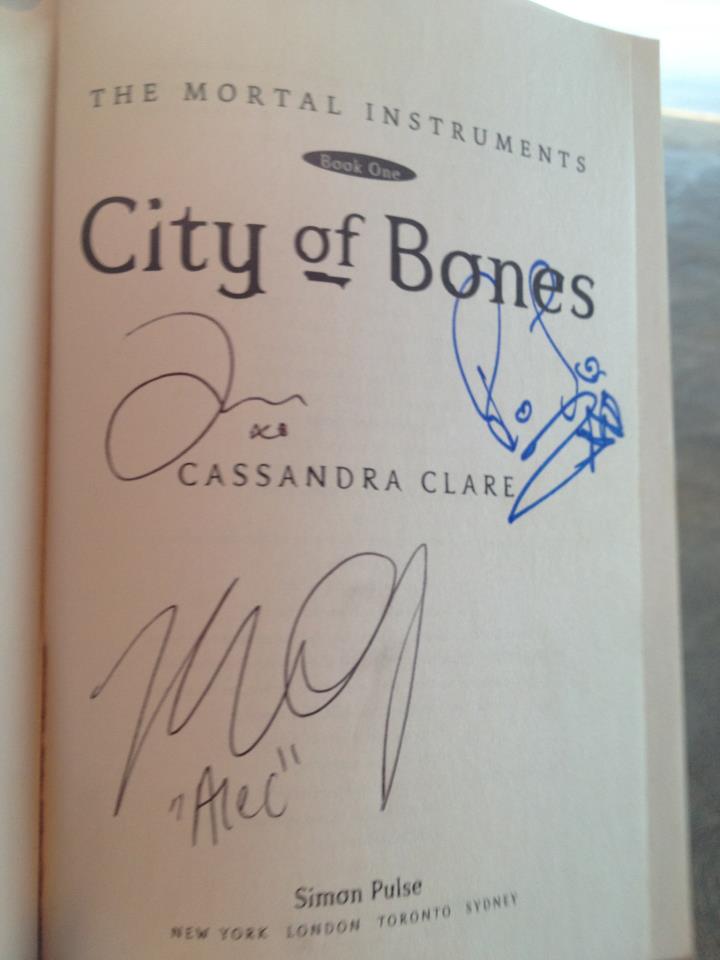 Filming on the highly-anticipated adaptation of THE MORTAL INSTRUMENTS: CITY OF BONES continued on Thursday in Toronto. One of our Toronto lookouts, Christine (@fleurdylys), made the trip out to the set where she got to watch the first day of filming at the Institute and also met Jamie Campbell Bower (Jace), Robert Sheehan (Simon) and Kevin Zegers (Alec). Check out her full detailed report:

Hi everyone! my name is Christine and my twitter and tumblr name is fleurdylys. I've been wanting to go downtown all week to the TMI Set but have been so sick and busy too, but I finally braved it today! I left Bolton super early to avoid any traffic and to make sure I got to the right set and I got there about 9:00AM! Talk about determined! When I arrived, I spoke with the night-time security and he had said that he was there since Monday setting up for yesterdays and todays shoot. He also mentioned that they were going to attempt to finish all shooting today and tomorrow, so I'm assuming they will be back to film there tomorrow. He also told us that call would be 11:30am.. so they should be arriving soon.  We waited.. and waited and waited.. but didn't look like much was happening. There was the same yellow tubes going in the door as yesterday and at one point someone brought out an infirmary bed to be disfigured a bit and also some drawers. We also got a glimpse of the courtyard where some of the filming was being done but there was a lot of security and there was a lot blocked off at the time as well. 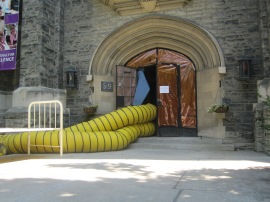 Me and a few others walked down to where the trailers were eventually and that’s where we first saw Jamie, but he went back into his trailer quickly. We then saw Kevin walking down the path in a hoodie, and we asked for his autograph. I was so nervous, I was able to stumble out the words “how are you?” and he says “no one ever asked him that before” haha! and he signed my book. He even included “Alec” underneath his signature which was super adorable. You can tell that he had makeup bruises on his face and that he was covered in runes. We asked if we could take photos but he said we couldn’t. That notion was later reconfirmed by another member of the security team and he told us directly that “it was fine that we were there, as long as we didn’t take photos because he didn’t want to ask us to leave” he was super nice about it and said that it was lovely that we were down there showing our support.

Next to the trailers were also the makeup and costume trailers so we kept getting glimpses of the shadow hunter gear costumes being delivered to Jamie’s trailer. At one point we saw an outfit being carried by a crew member that looked like could’ve been worn by Simon. But we were unsure as to if Rob was to be on set that day, because from the book, Simon didn’t have many institute scenes. Then a bit later, a car pulled up.. and Rob came out, in a wife beater, looking gorgeous. and of course, eating. haha ❤ I love that all the photos I’ve seen him in. he’s been eating something. He very sweetly said he could sign for us and said “that they weren’t the best looking signatures ” but it didn’t matter, I was just SO BEYOND SPEECHLESS to see him. I was able to stumble out ‘I’ve been waiting for you all day!’ and he replied ‘That’s dedicated!!’ ❤ He just looks that much more amazing in the flesh and I can’t express how happy I am that he was just so sweet and took his time even though he was in a rush. A crew member came though and rushed him away because he had to go to fitting. He came back a little bit later dressed in the clothes we saw earlier but with the “made in brooklyn” t-shirt which was super adorable and as he walked by us all again, he said hello again! So sweet! Funnily enough, he ended up right back past us again because apparently he wasn’t wearing the right pants? haha From there, some girls had asked for a hug.. and then we all jumped up one by one and got a hug from him. I think I was the last one to get a hug? But he just gives the biggest hugs ever. He’s so sweet. Squeezed my arm three times haha! AHHHH!! He said “I have to run hun!” gaaah. and then he was off and in a car and back to the Institute I’m assuming.

Jamie also eventually came out but he came to us and said “I’m sorry, really sorry, but I have to go but I’ll be back shortly.” So we all decided to wait a bit longer. We waited a few hours and he finally came and I was so happy I stayed because it was so worth it, He was walking back with a crew member and Lily and stopped immediately at us and said “He had made a promise” and signed our books. So sweet!! He said bye to us and went back into his trailer. Here, I’m presuming is when they all went on their breaks.

I saw Lily multiple times throughout the day, but the first time I was so starstruck by Robert, I didn’t even notice her, whoops! And then when she came by afterwards, she was in gear but she very nicely said hi to us and waved and said that we were dedicated! She looked AMAZING in gear, absolutely stunning. Her hair was gorgeous and she was wearing these extreme heels which I’m guessing belongs to Isabelle?

I also saw Jemima in the beginning but she wasn’t dressed and she was in a rush but she quickly waved and was on her way. She looked SO pretty! I’m so excited to see her in the film and wish i got to see more of her today.

We also saw a guy dressed in Shadow gear all day. so we finally asked who he was and apparently he was Godfrey’s stunt double?!? hmmmm..

Overall, it was such an amazing day. I got autographs from Kevin, Robert and Jamie and it was well worth the wait. Even though i don’t have physical images of them, I have mental images, and just seeing how sweet and humble and also hardworking they all are, makes me so happy that they were casted for the movie and makes me even more excited for the film than I was before. I hope to come back again to the TMI set because it was a super fun day and I got to meet some fellow shadow hunters who were awesome 😀

Thanks to Christine for sharing her experience with us!

2 Comments on TMI Set Day 5: Christine’s report from the CITY OF BONES set