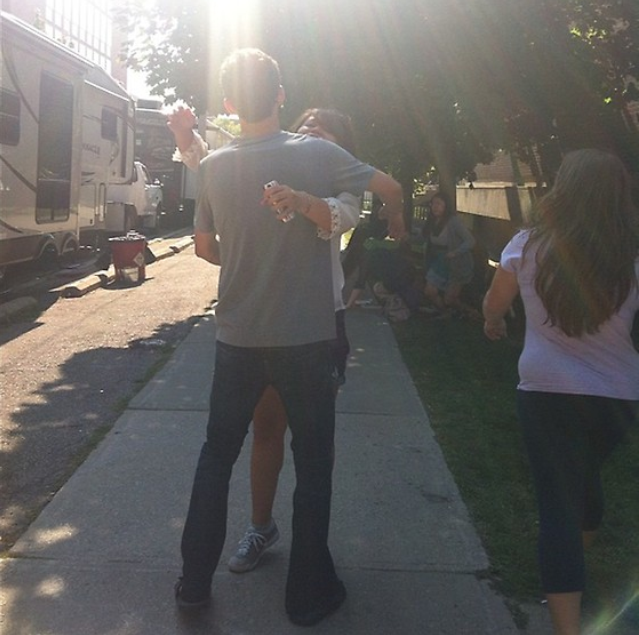 Filming on the highly-anticipated adaptation of THE MORTAL INSTRUMENTS: CITY OF BONES continued on Friday in Toronto. One of our Toronto lookouts, Humility (@humilityc), made the trip out to the set for the second day of filming at the Institute, met the cast again and got a hug from Robert Sheehan (Simon). Check out her full report:

The set they chose as the "Institute" is a beautiful place! It has such an ancient feeling to it well based on what I saw from the outside. Unfortunately, they did most of their filming inside the Knox building which is why I do not have much to report today (bummer...). We were not allowed inside and we were not allowed taking pictures with the cast members... Although, a few of us Shadowhunters did some snooping and got to look at an area where they had cameras and lighting set up at a courtyard area (posted a picture of it). I am not sure if this is the area they chose as the "greenhouse scene". Also, The crew took out this old infirmary bed outside to fix it up... Some of my followers believe that they were filming the scene where Clary is recovering from an attack. I suppose that is correct because from seeing Robbie/Simon & Kevin/Alec all bruised up and cut up! Their make-up looked very real!

We managed to see all the cast members but unfortunately like I said before we weren’t allowed taking pictures… Lily was stunning! as usual and so VERY KIND!

First time meeting Jamie, Jemima, and Kevin today. Jamie was sooooo sweet and very good looking ;)! When he got out of his trailer he was like “Sorry ladies, I have to go to work, but will come back shortly”. Oh by the way he was talking with his accent! So awesome! By the way, when he left his trailer he was wearing his gear and has runes, I remember seeing the ‘speed’ rune on his neck… I tried to wait to get his autograph but he was very busy filming :(!

OMG! Jemima! She’s SO beautiful! I seriously picture her as Isabelle and kicking some demonic butt with her whip! I was so star struck when I saw cuz she was so pretty! We told her she looked pretty & she smiled & waved but had to rush off to get ready to film! OH WELL! it was still an honor seeing her!

Kevin is SO handsome! His blue eyes are… GORGEOUS! So Alec. While he was signing my CoB novel, I managed to compliment him about how cool it is to have a Canadian starring in the movie. He smiled and replies, “YEA! WOODSTOCK!” He’s adorable, witty, & did i mention Canadian :D!

ROBBIE! Second time to meet him and still he’s still AWESOME like the last time I met him! After he and Lily finished filming a scene in the college, we managed to sneak into a small area to say hi and he says hello in his accent!! Man if only they could use his Irish accent in the movie! I wouldn’t mind ^.^. As he was signing autographs I was able to give him my amateur drawing of him & he was so surprised that I drew something & let him keep it lol. Hope he keeps it! I asked him if he kept it or throw it out my ghetto drawing & he’s like NO! I put somewhere in my cellar, HAHAHA (hope he did!). OH! forgot to mention! He was so kind because he hugged all the girls that were waiting still, including me *blushes*! What a great guy!

OH!! We also saw an Asian guy dressed up in black gear & black boots, we couldn’t recognize him so we assume he’s an extra shadowhunter to be filmed…

Isn’t the Mortal Instruments cast amazing? They’re very humble & all so good looking! They don’t need any make-up in my opinion! But not only are the cast members great so are the crew members! A few of them remembered me and were goofing off with them! One of the guys is hilarious, he’s like, “I remember you, you’ve been here 3 times now! You need a life!” HAHAHA! He talked to us fans and was like why do you guys wait to see them?? Then he was rambling on about how they’re like us, they go to the bathroom (this part of the convo was the funniest), have fights, etc.. Oh did I mention this guy has worked with Sienna Miller & Daniel Radcliffe? Awesome right? Like his hilarious sarcastic ways.

OKAY! Well that’s all I’ve got sorry it wasn’t as thrilling as DAY 2 but the security was a lot tougher this time and the cast were all in a hurry. ANYWAYS! Today has still been memorable and met some great TMI fans @soapiie , @nics_herondale & much more! Love the #tmifamily ! ❤

Thank you to Humility for another great report from the set!

Check out Humility’s photos from the day:

5 Comments on TMI Set Day 5: Humility’s report from the CITY OF BONES set