While waiting for the premiere of  The Mortal Instruments: City of Bones to start I got talking to a wonderful fan who had won premiere tickets, and whom I had previously met named Teiah Faulk (16). I asked who was with her (who turned out to be her brother Marc Brooks [27].) Knowing how fans can come across I told Marc that he was a very nice older brother and asked if he wouldn’t mind giving me his complete and utterly honest opinion about the movie, as sometimes a review from a fan like me could be taken as biased. 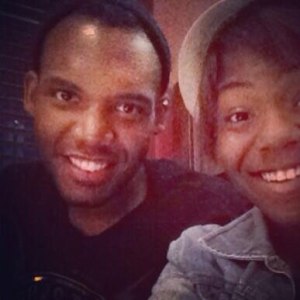 When the movie ended  Teiah  said ” I thought it was amazing… They got most of the facts from the books in. There were some changes but it all worked…If you don’t die from the Clace feels then I don’t know you must be a mundane”  Then I asked what Marc thought to which he replied a short and sweet “I thought it was pretty good.”  As that was not the most sparkling of reviews (and I didn’t want to keep them from getting home) I thanked both Teiah and Marc and they went on their way.

It wasn’t until later when I was contacted by Teiah on twitter informing me, if I would like a more in depth review from Marc we could skype call. I immediately agreed and the following is my interview with Marc…. The 27 year old male who brought his sister to the premiere … non-fandom … TMI virgin (if you don’t mind the term) 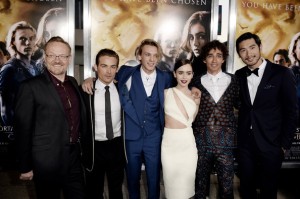 What did you think of the movie?

“I was trying to be objective as I watched it. I like action movies and the action sequences were done really well. The set up of the storyline was easy to follow and really fast to understand.”

On a scale from 1-10 what would you rate this movie as?

What was your favorite part of the Movie?

“The one girl shadowhunter the one with the whip I thought she was pretty cool.”

Anything that you found interesting?

“I’m really anxious to see what happens with the incest story line, that was a little weird.”

After seeing the movie would you read books?

“The way that the movie exposed the story was done well.  I’m interested to see what I would come up with  in my own mind as a opposed to seeing it on the screen.”

Would you see the sequel?

“Yes. I’m excited for the sequel I want to see what happens.”

Would you suggest it to your friends? (Particularly guys)

“Yes. I think the action sequences would be something that they would like, and the world they set up was very dark, it was really cool.”

I wanted to personally thank Teiah and Marc for their reviews. It’s always good to have a super fan and an outsider’s view. I think that Marc’s reaction speaks for itself. This truly is a movie that is not just for the “fangirls” but for a good, entertaining, action packed movie.

The Mortal Instruments: City of Bones hits most theaters August 21st. Make sure you take that “non-fan” with you and tell us how you both liked the movie!

I'm Megan. I am extremely sarcastic and I like making other people smile.