There’s nothing more overwhelming as one is entering adulthood than when you find yourself thrown into a hidden world ripe with magic, gnarly demons, and really attractive badasses that tell you that you’re one of them. Not that we’d know from personal experience. But that’s Clary’s foray into the Shadow World in the Shadowhunters pilot. “I’m turning 18 it’s not like I’m off on some epic journey,” Clary tells her mother early on in the episode. Oh, but she is much as the on-the-nose dialogue indicates.

Shadowhunters opens with our Shadowhunters Jace, Alec, and Isabelle tracking a shape-shifting demon that is selling mundane blood to demons (um, ever heard of a blood bank or a hospital? They’ve got quite the storage there). It doesn’t take long before Jace bumps into Clary with an introduction that will launch these two off into what we’re assuming – via the books – is an epic love story filled with just about as much angst as one could fathom. “You can see me?” Jace asks stunned as we transition into the very cool opening title card.

We flashback 8 hours earlier where we find Clary (the birthday girl!) at the Brooklyn Academy of Arts, where she’s submitting some of her work in hopes of being accepted. Long story short, she gets in not because of her original work but because of her graphic novel and rune sketches. We see tons of congratulations from Simon to Dot (who I’m not really feeling) to Jocelyn to Luke before Clary sets off with Simon and newcomer Maureen (who I’m not sure if she’s Simon’s girlfriend or maybe girlfriend and if I should care at this point) for her 18th birthday celebration, which includes watching Simon’s band, which isn’t so much a band as it is a duo (where’s Eric and his ludicrous poetry?)

But we soon find ourselves back at the start of the episode when Jace bumps into Clary, who can see him despite the glamour that conceals him from everyone else. Jace is more than intrigued as is Clary who follows him into PanDEMONium (clever, clever with the lighting). It’s there where Clary gets a front row seat to the action-packed, demonic world that she’s about to become a very important part of. From shapeshifting demons to mystical seraph blades that kill with too much ease, to say Clary is shocked would be an understatement.

Welcome to the Shadow World. 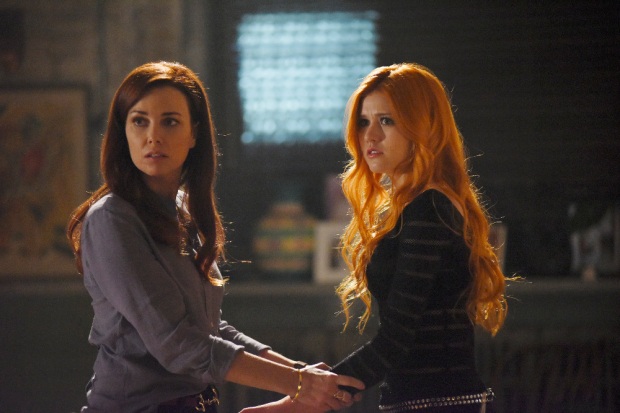 Clary thinks she’s been drugged and is having a nervous breakdown because she believes that she killed a guy. But not a guy, a demon. This provides the perfect leeway for Jocelyn to tell Clary about this world that she’s kept her hidden from for so long but all of a sudden decides she has to tell her.  So Jocelyn enlists the help of her warlock friend Dot, who seems to be filling in for Magnus what with creating the potion and creating portals and such, to help send Clary someone safe now that the Circle has found her and more than vehemently wants the Mortal Cup for Valentine. So as Clary is sent through a portal to the police station where Luke, the one person her mother says to trust, but she learns that he’s been using her and her mother to find the Mortal Cup (only we know this to be untrue. One of the many benefits of having read the books).

So what’s a girl to do? Return home, of course. Only Clary doesn’t know that her mother has taken a sleeping potion and been taken by the Circle, which kind of lacks the genuineness of the scene in how it was intended. To be honest, it made Clary’s desperate search for her mother less genuine than the books — or even the movie — when the last time that Clary had spoken to her mother they’d gotten into an argument and the last time Clary hears her mother’s voice is in a panicked goodbye and insistence for her daughter’s safety. At this point Clary doesn’t know that her mother is in danger only that she has to return home because where else is she going to go? That was a plot point that lacked a smooth transition.

When Clary returns home — in the pouring rain, of course — she finds a pool of blood on the ground and the place ripped to shreds. She breaks down crying out for her mother before gathering herself and going to find out what the hell happened. She finds her friend Dot, who is really insistent when it comes to knowing where the Mortal Cup is. Turns out Dot isn’t actually Dot but a Ravener demon sent by the Circle, I assume, to find out where the Mortal Cup is. While Clary manages to stab the thing — go girl! — she soon watches as Dot morphs into the grotesque true form of the demon, and it takes a bite out of her before Jace kills is with a snarky “What, no thank you for saving your life?” Jace starts talking about Ravener demons and such which has Clary’s head spinning, but that’s also because she’s got demon venom racing through her veins. Jace catches her as she falls and carries her back to the Institute, in what was a nice callback to the scene in the book.

Clary wakes up in the Institute’s infirmary, where she comes face-to-face — or actually head to face (“Ow.”) with Isabelle. It’s not long before Jace and Alec enter as they argue about whether or not Clary is a mundane. It’s a nice banter between the parabatai — “Here’s a word you don’t hear me say often, please.” — and we see Alec’s jealousy come out as he’s surprised by Jace’s interest in this girl that just came into their lives. We see Isabelle confront him about such in the hallway, but Alec says it’s this girl compromising the mission that has him feeling this way. (But we know better).

Once alone, Jace explains the complex Shadow World to Clary where all of this information literally has her head spinning (probably feels the same way for the new audience unfamiliar with Cassandra Clare’s books). Clary then gets a call from Simon who made handy use of the “Find Your Friend” app and locates Clary at an abandoned church.

Outside the Institute, Clary greets Simon (with a glamoured Jace in the shadows) when one of the Circle members confronts her and Jace fights him. Clary’s watching this invisible battle in horror as Simon continues to be confused as hell. “This is for my father,” Jace say as he stabs the man. Once everyone is all de-glamorized things begin to heat up. Simon begs Clary to go with him to Luke, but they can’t trust Luke, Clary tells him. But Jace is concerned with keeping her safe because she’s one of them; she’s a Shadowhunter. One of the great things about this scene was how the love triangle was so perfectly set-up — with both Jace and Simon begging for Clary to go with them, and with Clary standing smack dab in the middle of them torn about who to follow, who to choose. That was nicely done.

Cut to a heated Valentine — “I don’t see the Mortal Cup!” — who is this close from offing another member of his Circle because of anger issues that he should really deal with. While they didn’t find the Cup, they did find a daughter. Jocelyn’s daughter. That silences Valentine, and you can see the gears in his head turning as he puts the pieces together. This daughter is his daughter, as well. “Well,” he says in a remarkably calm manner, “I’d like to speak to Jocelyn’s daughter.”