It also spawned a top worldwide trending topic and the tweets grew to 100,000 after the cover reveal in just a few hours. 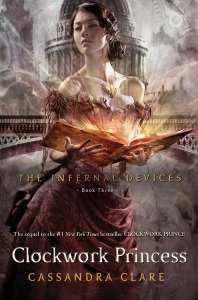 Publisher’s Weekly wrote an article about the reveal and the power of the Shadowhunter Chronicles‘ fandom–which we know is all powerful.

The cover of the March 2013 novel from Margaret K. McElderry Books, which has a million-copy first printing, was posted on the series’ Web site at 3:00 p.m. EDT on July 10, but it was hidden behind an ethereal veil that only tweeting readers could remove. For every tweet sent that included the hashtag #ClockworkPrincess, the veil was diminished, revealing the cover one shred at a time.

It didn’t take long for fans to complete the task. Immediately after the veiled cover appeared online, the publisher began the reveal challenge, which was announced through Clare’s Twitter, Tumblr, and Facebook channels. Tweets began to pour in instantly, and within two hours, fans had generated 30,000 tweets, the cover appeared in full view on the Web site, and #ClockworkPrincess was trending worldwide on Twitter. S&S posted a video on YouTube chronicling the progression of the gradual cover reveal.

But the tweeting didn’t stop once the cover was revealed. By 7:00 p.m., there were 100,000 fan-generated tweets as readers continued to express their excitement about the author, the Clockwork Princess cover,and the reveal process.

The article also talked about the cover reveal process, which was the first of its kind.

The cover reveal was masterminded by Matt Pantoliano, senior digital marketing manager of S&S’s Books for Young Readers. Noting that, to his knowledge, this reader-driven reveal is a first for book publishing, he explains that the promotion was somewhat inspired by the reveal procedure of a poster for a Batman movie several years ago. “It’s been in the back of my head for a while as a cool thing to do,” he says. “Cassie has a big following on Twitter, so we knew she’d be the right author to do this kind of reveal for.” And with 12 million copies of Clare’s Mortal Instruments and Infernal Devices novels in print, the author certainly has a sizable and widespread fan base.