Every Monday here at The Mortal Instruments Source is Movie Monday, where we talk about one of the many topics involving the movie adaptation of “City of Bones.” 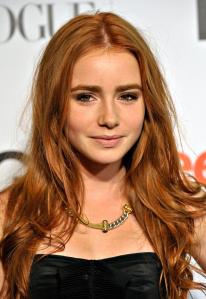 Cassandra Clare on Lily Collins: "She is completely adorable and looks right for Clary to me."

When Lily Collins was cast as heroine Clary Fray in the upcoming “The Mortal Instruments: City of Bones” film adaptation, she was surprised at how well the fandom embraced her.

“When I found out I was cast, I found out that people were tweeting about me getting cast as their heroine,” she told MTV back in January. “I know that I’m playing a character in a book that is very popular, but I forget that books have so many fans, that if they don’t agree with the casting, it could go terribly wrong. I was so grateful that all these people were tweeting like, ‘Oh, we’re so excited. We totally see her as Clary and we can’t wait to see what she’ll do.’ I don’t know what I would have done if people responded negatively.”

Since that moment Collins has treated the fans with the same acceptance and has been more than eager to share with them to movie process. She created a Twitter account (@LilyAsClaryFray)  from which she has already begun sharing “Mortal Instruments” movie secrets and asking fans for their input on the ever popular Jace casting debate.

“It’s kind of the first time that someone is tweeting as a character,” Collins told MTV last week, “giving inside information as to casting ideas or set pieces or costume design. It’s really to feel that everyone is as involved in the process as possible. The readers are a huge part of the story’s success so why not involve them in the movie process, as well?”

One of the most comforting parts about Collins’ casting as Clary is her complete understanding of the character. Things like hair color (which shouldn’t be a problem as Collins went red for “Priest,” see above) can be manipulated but essence or actual acting skills cannot.

Her understanding of Clary comes from her love of Cassandra Clare’s books. She admits that, like us, she is a huge fan of the books and cannot believe that she has the opportunity to play such an inspiring heroine like Clary.

“The studio wanted it to be very much about having the fans’ input,” she said, “because like the readers of the book, I’m also a big fan of the series. To be cast as the heroine that I’ve admired in books for me is a huge deal. Being one of them as well, I want to know what they think for certain characters.”

Clare has been nothing but accepting of Collins’ casting, admitting that she believes that Collins will do an amazing job.

“She is completely adorable and looks right for Clary to me,” Clare wrote on her LiveJournal when the announcement was made in December 2010.

Collins didn’t have to audition for the role but her performance in “Priest,” which is in theaters now (read my review here), was enough to get her the role. Her character in “Priest,” Lucy, had some Clary in her and the studio was convinced.

“There are many of that character’s traits that I can also find in Clary,” she told MTV back in December. “I guess they felt passionate that they saw certain characteristics as well, and they felt confident and really believed in me. I’m still in awe.”

Check out Collins as Lucy in this clip of “Priest.”

“The Mortal Instruments: City of Bones” is scheduled to begin filming in late summer or early fall, and in 3D no doubt, in Los Angeles and some in New York. The studio is the midst of casting Jace and has already begun looking for Simon suitors.

What do you guys think of Collins as Clary?