The frenzy that has become THE MORTAL INSTRUMENTS: CITY OF BONES filming showed no signs of slowing down Wednesday on the third day of shooting.

Robert Sheehan continued to be sweet, charming and adorable to fans and more fans got the chance to meet our Simon, as well as watch more filming of the Java Jones scene.

From set reports to casting news, catch up on everything that went down on the third day of filming: 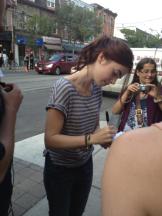 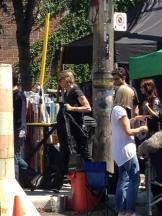 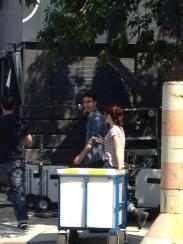 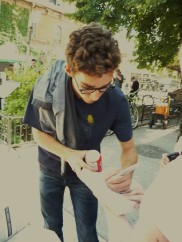 Lori, Stephanie and Angela: “…Finally Robert goes to pick up a drink, a can of Coke, and my heart stopped because he was COMING TOWARDS US. I didn’t even have time to react, oh my god. I was so shocked. I just fumbled for my camera and book. I honestly cannot get over how kind Robbie was. He was greeting everyone, smiling, he answered some questions, and signed lots of people’s books. (Including ours) One girl asked him- “Do you like to have sex with fruits?” I didn’t really get it, and it was kind of awkward but he said, “Yeah, who doesn’t?” And he laughed. His laugh is musical. My cousin told him she loved him in Misfits and he was like “Wow! That’s so weird to hear from someone on this side of the world.” And then I wanted to run and hug him but one of the crew workers came and was trying to get him to leave but he continued to sign people’s books and talk to us. I was so happy to really see what people meant when they said he was so nice and enthusiastic. I didn’t expect a celebrity to be so kind to fangirls like us. And I’m also glad that he’s playing my favourite character…” Read more

Aathy: “…Jamie seemed to be really focused throughout the day on bringing our sexy hero to life and maybe he stay affray from his fans to keep the vulnerable persona in tack for shooting time! It totally made sense after what I saw next.

They were hosing the road when it was starting to get dark and we all decided to head across the road, homebound. That’s when we saw in a few minutes a crew member nearly hit by car while hosing the road down with water (to look damp I guess) and Jamie in his shadowhunter gear looking into the Java Jones among a crowd of extras. So cool and to make things even better! The lighting inside was lit really bright so we saw Simon directly across that window with 2 coffee cups and clary sitting down in a chair! It had of been the scene in Chapter 3: Shadowhunter, when Jace comes back to see her! So awesome…” Read more

Sam: “…Later, Lily and Jamie came out but Jamie was of course hiding

they stayed there for a bit but then they headed back to the café and Jamie wasn’t wearing his jacket, finally! I got a picture of some runes on his arms! Then they went back in the café, but Lily wasn’t wearing her jean jacket, so she was in a white tee and a plaid vest on, jeans and her hair down. Robert was wearing jeans and a black t-shirt. And of course, Jamie was in all black. They filmed for a bit and when they came back around to the tent, Lily was in her coat again, but not for long because they did a costume change! And Robert of course has to be a tease and change his shirt right where we can see him! But he was so quick that none of us had enough time to get a picture!…” Read more

Stefania: “…We went back to set and about 2 hours later the publicist went and called Robert over again!! No Irish accent though =(  He signed some stuff and we took pictures of him. Not even 20 mins later Miss LILY COLLINS comes by!!!!!!!!!!!!!!!!!!!!!  She was super sweet and gorgeous! I was one of the last people in the circle around Lily to get an autograph.  Lily’s face when it’s my turn O.O!  I drew a picture of her to get signed and she was REALLY liked it! “Wow! Did you draw this?! You drew this!? It’s AMAZING! <3” I was so happy !!!!!!! I have a picture of Lily’s O.O face and pointing at my drawing! …” Read more

Elyas M’Barek cast as Vampire Lieutenant in CITY OF BONES

German actor Elyas M’Barek has been cast as Vampire Lieutenant in THE MORTAL INSTRUMENTS: CITY OF BONES.

Originally we thought M’Barek would be playing Raphael, as he was cast as a “vampire,” but according to Cassandra Clare, Raphael won’t be in the first film. There wasn’t enough time to introduce his story arc.

But if there are future films, which depends on the success of CITY OF BONES, Raphael will be introduced. 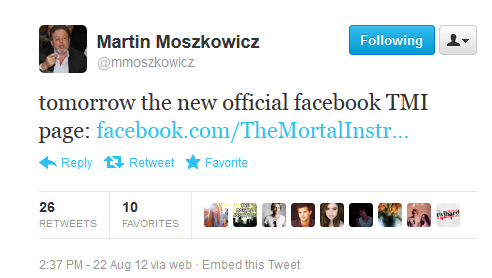 No word on when the page will launch, but stay tuned to Facebook.com/TheMortalInstruments.

After the previous three days of excitement and with the one-year mark before the theatrical release of THE MORTAL INSTRUMENTS: CITY OF BONES, Day 4 of filming is already shaping up to be an exciting one.