After the whirlwind that was Day 1 of filming on THE MORTAL INSTRUMENTS: CITY OF BONES in Toronto on Monday, you’d think that it would be all downhill from there.

But, in fact, the exact opposite happened and we got even more set photos and fan accounts on the second day, as well as two big news items pertaining to the film franchise.

From set photos to news about the CITY OF ASHES screenplay, catch up on everything that went down on the second day of filming: 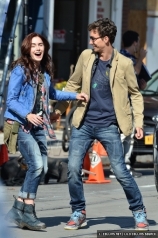 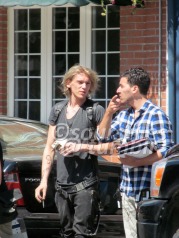 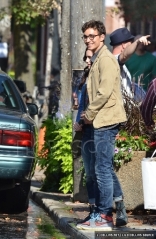 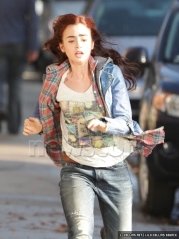 Humility: “…They had many areas of filming… One was at some little playground, one on the street (mostly stunts) and then they (lily & robbie) were acting in front of a cafe. Based on the acting we saw, Clary & Simon were having an argument about something & the something is probably Jace ^.^ just guessing! Omg I could hear Robbie talking w/o his Irish accent! It was incredible how he can switch back & forth from his accents *drools*. Lily & Robbie had to film that scene so many times (prob around 20 times) because there was so much traffic & the TTC trains kept coming by.…” Read more

Rebecca: “…Eventually we noticed that Robert was down the street a little. We walked towards him but stopped because we weren’t sure if they were filming a scene or not and we didn’t want to intrude. We soon realized that he wasn’t filming, he was just talking to someone so we held up our books and sharpies, grinning like crazy people while nodding our heads. He grinned back and literally WAVED us over to HIM. We took off running towards him. He seemed so genuinely pleased that we were there too. He is such a sweetheart! Two of the girls asked him to say SAVE ME BARRY!! (a line from his Misfits days). I told him that he was missed on Misfits and he was all “Aww!

” We asked him for autographs too but instead of an autograph I wanted a photo because It’s. Robert. Sheehan.…” Read more

Raian: “…The scene they were filming was of Clary & Simon who were clearly in an argument. Clary stops, looks at something as if she’s trying to see through it and gets a ghostly look on her face. I definitely thought it was of her seeing a glamour. Afterwards Simon calls her name she shakes her head and starts following him again. The director yelled cut and Robert started to do this silly dance and almost fall over a pylon that had everybody cracking up. Robert and Lily’s relationship is awesome they kept smiling and making jokes with each other.…” Read more

Hailey: “…At that point we saw Robbie in his adorable glasses. We wanted to get even closer so we crossed the street to the side where Lily and Robbie were standing. We stopped right behind a shop and were about 10m away from them. I looked behind me and saw Sandra (@Shadowhunting) from twitter! We said hi and chit-chatted, but then Sandra, my friend and I decided we wanted to get even closer so we moved up a bit. The scene they were shooting was where Clary gazes and the ground and Simon walks over onto the street and goes “Clary…Clary…CLARY!”, we were almost catatonic with joy at seeing our favourite book being filmed.…” Read more

Screenwriter Jessica Postigo, who penned the screenplay for THE MORTAL INSTRUMENTS: CITY OF BONES, was on-set on Tuesday and met with several fans that were on-set watching filming.

Postigo revealed that she was leaving Toronto on Wednesday, but also that she is about to start working on the screenplay for THE MORTAL INSTRUMENTS: CITY OF ASHES.

German newspaper Bild is reporting that Elyas M’Barek has landed a role in THE MORTAL INSTRUMENTS: CITY OF BONES.

Executive producer Martin Moszkowicz shared the link on his Twitter page on Tuesday with the message: “Stay tuned.”

On Wednesday morning Moszkowicz confirmed: “It is confirmed. @Elyas_MBarek is in TMI.”

After the flood of set photos and fan accounts in only the first two days of filming, one can only imagine what Day 3 of filming on THE MORTAL INSTRUMENTS: CITY OF BONES will bring.